Maple syrup is a North American sweetener made by boiling the sap of maple trees. Commercial syrup is most often made from the sugar maple Acer saccharum because it has the highest sugar content, but it can also be made from other maple and box elder trees. Canada is the major producer of syrup, but it is also widely found in some northern areas of the United States.

An Iroquois legend says that a hunter returned to his dwelling where he found a sweet aroma emanating from the kettle in which his wife was boiling meat. Sap from an overhanging broken maple branch had collected in the kettle. Another similar legend is that Chief Woksis had thrown his tomahawk into a maple tree late in a winter evening. After he retrieved it the following morning the weather had become sunny and warm. Sap began to flow from the cut in the tree and dripped down into a cooking pot that was at the bottom of the tree. When Chief Woksis's wife boiled the meat that night for dinner the sap became syrup. 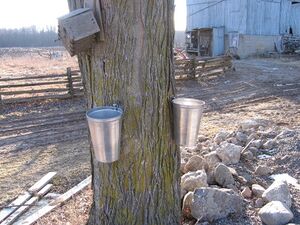 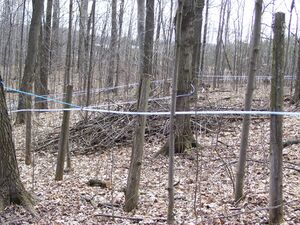 Network of tubing used to transport sap to the sugar shack.

A French missionary is reportedly the first settler to make maple syrup in the 1690s. Other settlers soon caught on. The first change from the traditional method of sugaring the settlers made was to substitute iron or copper buckets for the wood and clay buckets. As early as 1790 it was suggested that slashing the trees was not healthy for the tree and the settlers began drilling half inch holes in the tree and inserting a spile. Early spiles were made from soft woods such as sumac. The settlers would carry the buckets on yokes to large metal boiling kettles. Large flat pans would later replace the iron kettles.

Maple syrup was used in bartering. Maple sugar and honey were the predominant sweeteners in North America until the 1800s when sugar cane was introduced. Even then maple sugar was still more popular and less expensive than sugar cane. It was not until 1890, when the import tax on sugar cane was removed, that sugar cane finally outsold maple sugar.

Syrup can be made by anyone who owns or has access to maple trees. The taps can be made with a hand or a battery operated drill. Also needed are buckets, covers for the buckets, and spiles. Timing is essential in sugaring. The best time to put out all the buckets is on the first thaw of late winter; this is when the sap starts to flow. Sugaring is best when freezes occur each night and thaws each day.

After identifying a maple tree a half inch hole is drilled (slightly upward) into the tree and the spile is inserted. Sap begin to flow after only a few seconds from the spile. If it does not try drilling the hole a little deeper. Large trees can support two or three taps, but too many taps can kill a tree. Drilling does make the tree more susceptible to insects and disease that can harm the tree, but in most case the tree will heal quickly, unless it is in a particularly hostile and unhealthy environment. 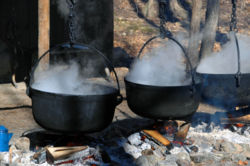 The ratio for sap to syrup is 35 or 40 to 1 (i.e. 40 gallons of sap make one gallon of syrup) for sugar maples, even higher for other maple species. This is an immense amount of water, so boiling in a kitchen is not recommended. Buckets can be put out in the morning and emptied the following morning. On a cold night the water will freeze from the sap, and the ice can be thrown away, as it is almost pure water. This helps concentrate the sugar and saves some boiling.

Boiling sap must be tended carefully, as it has a tendency to froth and boil over. It will acquire a burnt taste if boiled too long, and can fire and burn almost explosively if the pan boils dry. The syrup is ready to be bottled without danger of fermentation when it weighs eleven pounds to the gallon.

Sap is boiled on a large baffled pan in a sugar shanty (also known as a sugar shack, sugar house or, in Quebec, cabanes à sucre). The building has extensive ventilation to allow the escape of steam. Formerly wood was used as fuel, but most commercial operations now use gas burners, which give greater control over the heating.

Sap must be processed quickly or it will begin to ferment, degrading the final flavor. It is fed into the pan by gravity from the tanks through a float valve, so the pan cannot boil dry unless the tank is empty. The product moves along the pan following the baffles which allow for continuous removal of the final product at the other end of the pan.

Modern commercial operations generally use tubing for continuous sap gathering, rather than buckets, and many have a vacuum pump on the line for greater flow. In addition, boiling is reduced by the use of reverse osmosis membranes.

Syrup producers have struggled to maintain profitability, due to competition from imitation syrups, and many former operations have ceased business. Modern production is centered in a few large outfits.

Traditional syrup production was a family or even community affair that continued 24 hours a day during sugaring time. Draft horses pulled sledges through the snowy woods with tanks mounted on them to gather the sap. The first production is the highest quality, and the last is the lowest. When it becomes too warm for the daily freeze/thaw cycle the syrup becomes darker in color, fermentation of the sap becomes more likely and the final product is said to taste "buddy".

The partie de sucre or "sugar party" is traditional in Quebec. It consists of a group of people going to a cabane à sucre (sugar shack) during sugaring off time and enjoying a copious meal crowned with tire sur la neige (maple taffy on snow) for dessert and followed by outdoor activities or dancing to burn off some of the calories. The meal may include any or all of: pea soup, oreilles de Christ (literally, "Christ's ears"; made with fried lard), maple ham, baked beans with maple syrup, and pancakes. Copious amounts of maple syrup are poured on all the dishes.