Magazine is the name for a container where ammunition is stored. The term is used both for the reservoir for immediate-use ammunition that is attached for to a gun, or for a storage area for ammunition of all forms.

The most common type of magazine for a rifle or pistol is a straight or curved metal box, which mechanically connects to a matching opening in the firing mechanism of the weapon. A spring in the bottom of the box pushes cartridges into the mechanism. The user fires until the magazine is empty, and then changes the entire magazine.

(PD) Photo: U.S. National Park Service
19 Century lever action rifles, like the winchester rifle, had a tube magazine under their barrels, that could hold approximately a dozen bullets.

Some firearms, like the World War 2 M1 Garand rifle, employed a "en bloc clip".[1] This kind of magazine clip grasped the bullets, but didn't enclose them.

Most modern magazine-fed weapons enclose the cartridges in a box or drum shaped container.

More complex magazines for machine guns are not spring-loaded, but contain a belt of linked ammunition, which is drawn into the gun by a feed mechanism driven by recoil, exhaust gas, or an electric motor. Depending on the design, the links are discarded before loading, or the cartridges are stripped from the belt and the empty belt fed out an exit port.

It is important to protect the ammunition from the fire of one's antagonist's weapons, and from the effects of a malfunction of one's own weapons. So, if possible, it is desirable to armour the magazine. In the case of batteries of towed artillery the temporary magazine will be placed, if possible, in a pit, or natural declivity, or surrounded by sandbags or earthworks.

Historically, when artillery was powered by gunpowder, a vessel's magazine would be kept below water level. The gunner and his mates would wear felt slippers, or bare feet, to prevent sparks. The door to the magazine would be a wet, felt curtain. Light would be provided through a window, from an adjacent room. A naked flame was never allowed inside the magazine.

More modern warships used semi-automated or automated ammunition hoists for their main batteries. The path through which the weapon's ammunition passed would have blast-resistant airlocks. 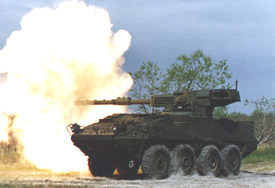 (PD) Photo: DoD
Prototype of the Mobile Gun System, firing the cannon in its remote controlled turret. Note the magazine, which can hold 18 x 105mm rounds.

Most modern artillery uses a preloaded magazine with a motor-driven system to move the shells.[2]