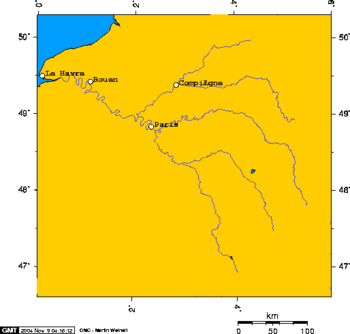 (CC) Image: Geo Swan
The River Seine, with Le Havre, the city where Hornblower becomes Governor, at its mouth, Rouen, where his troops ambush a French force, in its lower reaches, and Paris in its middle reaches.

Lord Hornblower is novel by C.S Forester about a fictional officer in the Royal Navy, during the Napoleonic Wars. Forester wrote eleven novels about Horatio Hornblower. Chronologically Lord Hornblower is the tenth novel. It takes place during 1814, the closing days of Napoleon Bonaparte's empire.

Hornblower is given the difficult mission of negotiating with mutineers about a small brig-sloop anchored near Le Havre, at the mouth of the River Seine. Unexpectedly the opportunity of accepting the surrender of Le Havre open up to him. He becomes the Governor.

He learns that Napoleon has freed up a whole division to recapture Le Havre, and that the division will be proceeding down the Seine in a series of barges. He dispatches a night raid, in his ship's boats, to raid the French expedition, and destroy its barges, near Rouen, approximately 80 kilometers up river.