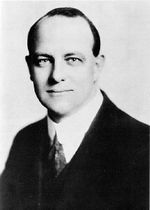 Lord Emsworth, more fully, Clarence Threepwood, 9th Earl of Emsworth, is one of the best-known characters created by the notable British humorist P.G. Wodehouse (1881—1975). An amiable but somewhat bedraggled and befogged backwoods peer, the proprietor of Blandings Castle makes his first appearance in a 1915 novel, Something Fresh, and remains markedly unchanged over the course of the next 55 years of novels and short stories in which he and his prize pig, the Empress of Blandings, attempt to lead quiet lives amid the turmoil of the convoluted plots into which Wodehouse constantly throws them. Longing for nothing more than to talk to the three-time-silver-medal-winning pig, or to potter peacefully about the idyllic gardens of the Castle, Emsworth must frequently confront the unpleasant reality of his many domineering sisters and their notions of his familial duties.

Lord Emsworth is consistently presented as being just shy of sixty years old; since Wodehouse wrote about him for over half a century, in novels always set more or less at the present time of writing, this means that his dates of birth and other chronological references vary depending on which book one is reading. As a child, we are told, he once took a dead pet rabbit to bed with him; at the age of 15 he smoked his first cigar, and since then he has rarely been called upon to think as quickly as he did upon hearing his father's footsteps approaching the stable-loft where he sat that day. Never the brightest of minds, at Eton College, they called him "Fathead"; and, by the time we meet him, his slowness of thought has become a byword. He is also prone to distraction and misunderstanding, but is almost always amiable, no matter how trying the circumstances. His simple outlook makes him an excellent sleeper and, for twenty years, he has rarely got less than his eight hours, usually managing ten (he is particularly fond of sleeping at the start of train journeys). In Something Fresh, the first novel, he keeps a revolver by his bed, with which to fire wildly at burglars or, inadvertently, his secretary, Rupert Baxter.

Lord Emsworth has ten sisters (one deceased), two brothers (one deceased), two sons, at least one daughter, and many in-laws – for a full list of his family members, see the Threepwood family list. He is a widower; his wife died some years before we meet him: "he was a man who since the death of his wife some twenty years ago had made something of a life's work of avoiding women." (Pigs Have Wings, 1952).

He is a long, thin, bald old man with a tendency towards scruffiness, generally found in a worn old tweed jacket and trousers that bag at the knees. He wears pince-nez on a string around his neck, which he nevertheless often loses. He resents being forced to dress up smartly, especially when he is also called on to address crowds and most of all loathes having to visit London when the sun is shining. In "Lord Emsworth Acts for the Best", he grows a rather ragged beard, little realising the peril this puts his castle in, and he soon realises it is better to remove it.

In his later years, the main troubles of his life stem from his many sisters, particularly the formidable Connie, who despair at his eccentric appearance and distracted ways, and his younger son Freddie, whom he longs to see safely married off and out of trouble; his joy at seeing him finally paired off with Aggie Donaldson knows no bounds. The frequent visits (in later works) of his disreputable brother Gally add further to life's complications and his sister Connie's frustrations.

In Jeeves Takes Charge, a short story in Wodehouse's Jeeves series, it's revealed that Lord Emsworth in his youth went about with young men who behaved "in a manner that would not have been tolerated in the fo’castle of a whaler" according to Lady Florence Craye.

He shuns his administrative duties and generally has a secretary to handle such things; amongst the occupants of this post have been the likes of Hugo Carmody, Monty Bodkin and Psmith, although by far the best known, and least appreciated by his Lordship, is Rupert Baxter, the bespectacled efficiency expert, who made Emsworth's life a misery with his ruthless organisation of his master's precious time.

Emsworth's favourite pastimes are his pig and his garden, and he spends many a happy hour pottering about it, arguing with his gardeners, especially Angus McAllister, whose desire to gravel the famous Yew Alley is particularly upsetting to his Lordship, and with his pig-keepers, who include Wellbeloved, Pirbright, and the Amazonian Monica Simmons.

He won first prize for roses at the Shrewsbury Flower Show in the same year Psmith's father won the tulip prize, and he is invariably amongst the competitors in Shropshire's Agriculture Show. He has some success in the field of large pumpkins, taking first prize in the competition with his "Blandings Hope" (cruelly nicknamed "Percy" by his son Freddie). He later enters his prize sow, the Empress of Blandings, who wins the coveted Fat Pigs contest several years in a row. The Empress's primary competitor is the Pride of Matchingham, who belongs to Sir Gregory Parsloe-Parsloe, Emsworth's neighbour and rival. Once the pig fever has taken him, he is mostly to be found draped bonelessly over the pig pen, looking like an old sock.

In less salubrious weather, he likes to mess around in his museum or sit comfortably in the library, reading some informative tome of agricultural lore; his favorite being, of course, Whiffle on The Care of the Pig. A well-preserved fellow, he has a swim in the lake every morning he can and has a fondness for amateur medicine, never happier than when trying out some new unction.

Wodehouse frequently named his characters after places with which he was familiar,[1] and Lord Emsworth takes his name from the Hampshire town of Emsworth, where Wodehouse spent some time in the 1890s; he first went there in 1903, at the invitation of his friend Herbert Westbrook, and later took a lease on a house there called "Threepwood Cottage", which name he used as Lord Emsworth's family name. Westbrook worked at a school in the town, and Wodehouse also mentions it in his 1909 novel Mike, as the place where Mike was at school prior to Wrykyn. Some of the many characters who are named after places in the vicinity of Emsworth include Lord Emsworth's heir, Viscount Bosham, Lady Anne Warblington, Lord Stockheath, the Duchess of Havant (in A Gentleman of Leisure), and Lord Arthur Hayling (in The Prince and Betty).[1]

The name "Lord Emsworth" first appears in Wodehouse's works as a passing mention in a short called "The Matrimonial Sweepstakes", a version of "The Good Angel" printed in Cosmopolitan in the US in February 1910. "The Good Angel" as it appears in the 1914 collection The Man Upstairs contains no such mention, although there is a "Lord Stockleigh" involved.

Lord Emsworth plays some part in all the novels and short stories in the Blandings canon. The short stories often feature Emsworth as the central character.