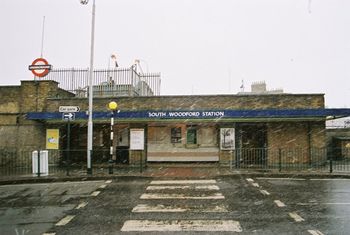 South Woodford station is a typical Tube station. It is served by the Central line.

The London Underground (or Tube) is London's metropolitan subway service, which serves a large part of Greater London, and extends into the surrounding counties of Buckinghamshire, Hertfordshire and Essex. The first services started in 1863, making it the first underground railway system. Parliament approved plans for the first service in 1854, which allowed the Metropolitan Railway Company to build an underground line connecting Paddington and Farringdon Street stations via King's Cross station. The line was quickly extended to reach to Hammersmith and Moorgate.

There are currently two methods used to make the tunnels used by the trains. The first is called cut and cover, which creates a line just below street level - for instance, the Circle and District Line were built this way. The other method is deep-level tunnelling, which is used for lines far underground, like the Piccadilly Line.

The Underground system covers 243 miles (392 km) of track, has 417 escalators (fifteen of which are inside Bank station), 64 lifts, around four thousand cars on the network, and the network serves around three million passengers every day (the day record total is 4.17 million).[1]

Transport for London has been encouraging people to start using Oyster cards, an RFID-based system which allows passengers to pay for tickets without carrying coins or paper tickets. This has been encouraged by increasing the price of cash tickets so that they are around £4 ($8 US), while keeping Oyster prices at £1.50 ($3), and making it so that some season tickets can only be purchased if they are tied to an Oyster card. The Oyster system works across a number of London transport networks, including the Tube, buses, the Docklands Light Railway system in east London, trams and some (but not all) overground suburban rail services. 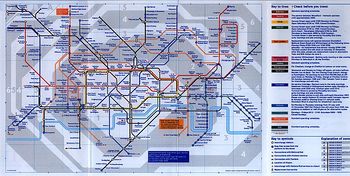 A tube map from 2007. Since then, the Docklands Light Railway, Piccadilly Line and London Overground have been extended.

Culturally, the Underground system is symbolic of London, and the United Kingdom generally, with international admiration. The diagrammatic map is known the world over, and is one of the simplest-to-read subway maps. It does not map to the geographical location of the stations, a fact that can cause some confusion for tourists (examples include the Bank-Monument stations, the closeness between Covent Garden and Leicester Square stations, and the recent temporary closures of Bayswater and Queensway stations).[2] The map is available on a whole variety of products, including shirts, mugs, bed linen, posters, jigsaw puzzles and many more. The Underground did not always have the diagrammatic map - it was originally designed in 1933 by Harry Beck. The typeface used was designed by Edward Johnston and is called New Johnston, and is used today on both the maps, and the signs used across the network.

In preparation for the 2012 Olympic Games in London, the Underground network, specifically lines serving Stratford in east London, the home of the Olympic stadium park, are apparently going to be improved.