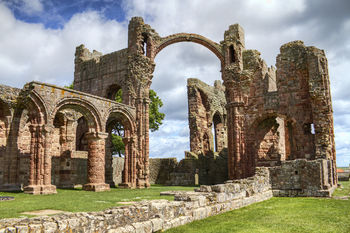 (CC) Photo: Tom Blackwell
The ruins of the 12th-century priory church at Lindisfarne Priory showing the "rainbow arch", the remaining arch of rib vaulting which was an original feature of the church.

Lindisfarne Priory was founded in 635 on what is now known as Holy Island, off the north-east coast of England. It was abandoned in the 9th century after repeated Viking raids, but was re-established in the 12th century. The priory was used until 1537 when it was dissolved. The ruins are now open to the public and under the care of English Heritage. Just 1.25 miles east of Northumberland's coast, Lindisfarne is a tidal island and is cut off at high tide for more than 16 hours a day.[1]

in the 7th century England was not a state, but a collection of small kingdoms. At this time Northumbria in the north east was the most powerful. Its population was pagan, but in 634 Oswald ascended to the throne. He had converted to Christianity in his youth and wanted his subjects to follow his lead. To encourage this, in 635 Oswald invited Aidan from the monastery on the island of Iona on the coast of Scotland to establish monastic community in Northumbria. The site chosen for this new foundation was Lindisfarne, a part-time (at high tide) island 10 miles from Bamburgh, the centre of Oswald's power.[2]

Based at Lindisfarne, Aidan was made a bishop and preached to the nobility of Northumbria. The first church on Lindisfarne dated from Aidan's time though it was replaced by his successor. A cemetery was established on the island, and Aidan's remains were interred there. According to Bede, Lindisfarne's monastic community had only buildings it needed to perform its religious duties and to get by, so though it was the seat of a bishop there was no high status accommodation. In the 685 a monk named Cuthbert, later canonised as a saint, was made bishop. His health failing him, in 687 Cuthbert became a hermit on the Inner Farne Island near Lindisfarne and gave instructions that he should be buried there. He died that year, but his remains were taken to Lindisfarne and interred in the church. A shrine to Cuthbert was created and it soon began a focus for pilgrims in northern England.[3] 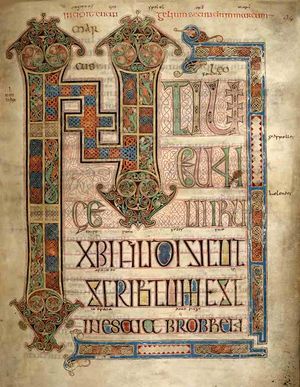 (CC [1]) Photo: manuscript_nerd
The Lindisfarne Gospels were produced in the first quarter of the 8th century.

In 737, King Ceolwulf of the Northumbrians retired to Lindisfarne. Eadberht assumed the throne after Ceolfulf, and in 750 laid siege to the church on Lindisfarne. The reason for the hostilities have since been lost, but the Bishop of Lindisfarne was taken prisoner. This was the first time soldiers had marched on Lindisfarne, but would not be the last. In 793 the Priory suffered a Viking raid. Contemporaries were appalled, believing that Northumberland's Christians must have sinned for St Cuthbert not to intercede. Vikings continued to pillage parts of Northumbria for years to come, and in 875 the monastic community uprooted themselves from Lindisfarne in search of a more secure home, taking with them the remains and relics of St Cuthbert.[5] The raid was the first securely documented Viking attack on Britain.[6]

Lindisfarne Priory was re-founded as a daughter of the monastic community at Chester-le-Street where the monks who left the island in the 9th century had settled. It is uncertain when the priory was re-founded, but the earliest surviving reference relates to a monk by the name of Edward who oversaw the construction of a church on the island in about 1122. The church was small relative to contemporary churches, but was elaborately designed due to the island's connection with St Cuthbert, and shared architectural features with Durham Cathedral which was being rebuilt around the same time.[7] During the 12th century the Lindisfarne monks coined the term insula sacra, meaning "Holy Island" which is now an alternative name for Lindisfarne.[1]

Lindisfarne's parish included parts of north east England as well as the island the priory was situated on. The monastic community was supported by a tithe from its parish, meaning one tenth of the agricultural produce was the monks to do with as they pleased. In the late 13th century the tithe was worth over £100[8] but by 1327 this had fallen dramatically to £27. The reason was the outbreak of war between Scotland and England in 1296. One effect of the reduced income was that the priory could only support a smaller community, and the number of monks dwindled throughout the 14th century.[9]   From a peak of 10 monks in the 13th century, by the early 15th century there were only two or three. While the monastic community shrank, the buildings were reorganised and fortified. Though battlements were added and the priory enclosed by a walled, there was not the man power to defend Lindisfarne in the event of attack and records from 1367 show there there was full armour for one man and lances for five, but no bows.[10] 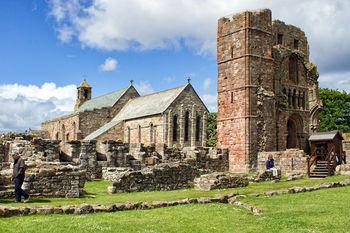 (CC [2]) Photo: Tom Blackwell
The west front of Lindisfarne Priory's 12th-century church (on the right) still stands close to its full height, though the north tower has collapsed. The west front was the main entrance to the priory church.

Between 1536 and 1537 King Henry VIII began dissolving religious houses valued at less than £200. In 1535 Lindisfarne Priory's value was assessed at £48, so it was amongst the first religious houses to be closed under the Dissolution of the Monasteries. Lindisfarne remained the property of the monastic community at Durham, though they leased the island to the Crown.[11] In 1538 the shrine of St Cuthbert was broken open and his body was reputedly found to be "uncorrupt, with his face bare, and his beard as it had been a fortnight's growth".[12] Otherwise the buildings seem to have remained largely intact and at one point were used for storage. However, in 1613 the lead was removed from the church roof and the priory buildings fell permanently out of use, allowed to lapse into a state of disrepair.[11]

As early as the 18th century the ruined priory was attracting tourists and interest from antiquarians. Lindisfarne Priory remained in the hands of the Crown until it was sold to the Shelby family, who owned parts of the island.[13] A small village was established on the island, close to the priory, though it is uncertain when it originated. Little is known about the residents' activity, though they were active agriculturally and supported the abbey through fishing. Fishing remained an important industry for the island's inhabitants after the priory was dissolved. From the 19th century tourism became increasingly important and now Holy Island's economy is based mainly around catering to people visiting Lindisfarne's priory and castle.[14] Between 2012 and 2017 the priory received around 50,000 visitors a year.[15]

Today, Lindisfarne Priory is open to the public and under the care of English Heritage.[16] The priory museum was opened in 1987 by the Bishop of Durham.[17]

The priory complex is oriented with a church at the north end, a range of buildings aligned north–south at each end, with a refectory to the south. Together these buildings enclose a courtyard. The church dates from the second quarter of the 12th century and is the oldest standing part of Lindisfarne Priory. Next oldest is the west range, built in about 1180, which survives only to the first storey. The ground floor was probably used as storage, while the floor above could have provided accommodation. The mid 13th century saw the construction of the east range (housing sleeping quarters for the monks and perhaps a chapter house) and the refectory and kitchen to the south, enclosing the courtyard. Around 1300 a walled courtyard was created south of the refectory, effectively doubling the size of the priory. Built in the context of the Anglo-Scottish wars, this area was probably created to give extra protection to the religious community at Lindisfarne.[18]