Linda Greenhouse is a Pulitzer Prize winning legal journalist, who wrote for the New York Times from 1968 to early 2008.She is now Knight Distinguished Journalist in Residence and Joseph M. Goldstein Senior Fellow at Yale Law School. [1] 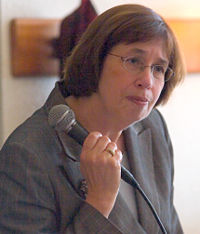 She is a fellow of the American Academy of Arts and Sciences, where she serves on the council, and is one of two non-lawyer honorary members of the American Law Institute, which in 2002 awarded her its Henry J. Friendly Medal. The American Philosophical Society, of which she is a member, awarded her its 2005 Henry Allen Moe Prize for writing in the humanities and jurisprudence. She also serves on the advisory council of the Schlesinger Library on the History of Women in America, at the Radcliffe Institute for Advanced Study (Harvard).

She has published on legal issues, with a biography of Justice Harry Blackmun, [2], the foreword to a book on Chief Justice William Rehnquist, [3] and a number of law review and general articles.

She covered the Supreme Court of the United States for The New York Times between 1978 and 2008, except for two years covering Congress.[4] She was awarded the Pulitzer Prize in Journalism (Beat Reporting) in 1998 "for her consistently illuminating coverage of the United States Supreme Court, " the American Political Science Association Carey McWilliams Award (2002) for “a major journalistic contribution to our understanding of politics,” the Goldsmith Career Award for Excellence in Journalism from Harvard University’s Kennedy School (2004),

Greenhouse and the New York Times negotiated a buyout and voluntary resignation in late February 2008. The New York Times had announced a plan to trim 100 staff members, and had asked staff to consider volunteering for a buyout.[5]

Greenhouse's husband, Eugene R. Fidell, is also a lawyer -- a specialist in military law. He has been a critic of the Bush Presidency's policy on captives taken in the war on terror.[6] On January 20, 2008 Clark Hoyt, of the New York Times described Fidell holding back in participating in preparing a brief submitted to the Supreme Court on behalf of National Institute of Military Justice and the Bar Association of the District of Columbia because of the concern it would be considered a conflict of interest, due to his wife covering the case.[7]

On January 22, 2008 Slate magazine, published an article written by Emily Bazelon and Dahlia Lithwick, criticizing the New York Times for failing to show more support for their employee.[8]

According to Bazelon and Lithwick the main critic of Greenhouse covering stories where her husband Fidell has a role is M. Edward Whelan III of the National Review. They wrote:

Unable to point to any actual bias, Whelan resorts to the petulant claim that the effect of Fidell's involvement in the detainee cases "would be impossible to separate … from the broader political bias that pervades so much of Greenhouse's reporting."

She is a 1968 graduate of Radcliffe College (Harvard), where she was elected to Phi Beta Kappa. She earned a Master of Studies in Law degree from Yale Law School (1978), which she attended on a Ford Foundation fellowship. She is married to Eugene R. Fidell, visiting lecturer in law at Yale.