Until approximately 1800, the population of Europe consisted mainly of farmers. They were in close contact with nature and experienced the ever-repeating seasons, thus developing the popular beliefs that are sometimes called lifecycle. The first signs of these can be dated back to the sixth century.[1] 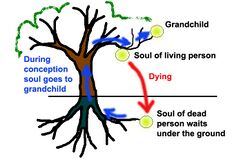 (CC) Drawing: Ed Jussen
The life tree as an illustration of the lifecycle.

Life and death followed each other in a quick succession.

Every human had his own body but also was a twig on the tree of all living and dead consanguinity. A human being was considered mainly as an instrument to pass on life.

By the end of the fourteenth century, citizens of Florence started to put out to nurse their new-borns for about two years to a nurse. This nurse usually lived on the country.[3] In the fifteenth and sixteenth century this practice spread to many towns of Western Europe. And it was also adopted by the lower classes.[4] [5] This way the mother did not have to feed her children and could get pregnant immediately after the birthgiving, because people wanted to beget as many children as possible.[6]

The body of the children was hardened, because the child should be able to conquer misfortune. It had to pass on life. It should realise that it belonged to a big family in both good and bad times. There was very little room for intimacy.

In the towns, the popular belief in Mother Earth and the eternal cycle of time gradually disappeared between 1450 and 1650.

In the seventeenth and eighteenth century the individual body started (symbolically) to tear itself free from the big body of his family. An individual more and more wanted to lead his own life instead of being nothing but a reproducer of offspring for his family. Life was short and one wanted to enjoy it as much as possible.

The popular belief of the lifecycle was gradually replaced with a linear and fragmented notion about life.