Leith is an area within the city of Edinburgh in Midlothian, Scotland, on the south shore of the Firth of Forth. Leith has been an active port for at least a thousand years; in 1329, Robert I gave control of the port to Edinburgh. Leith is connected to the centre of Edinburgh by Leith Walk, now a continuous street. Lying at the mouth of the Water of Leith, Leith stretches along the shore of the Firth from Seafield in the east to near Granton in the west.

'Inverleith' was mentioned in the foundation charter of Holyrood Abbey (now part of the Palace of Holyroodhouse) in 1128. In 1329, the Scottish king Robert the Bruce (Robert I) granted the harbour to Edinburgh magistrates, who did not always use their power wisely. They forbade, for example, the building of streets wide enough to admit a cart, a regulation that accounted for the number of narrow wynds and alleys in the town.

During the centuries of strife between Scotland and England, its situation exposed the port to attack both by sea and land. In 1313 and in 1410 its shipping was burned by the English. In 1544 and 1547, Leith (along with Edinburgh) was pillaged and burned by Edward Seymour, 1st Duke of Somerset. After the death of James V, Leith became the stronghold of the Roman Catholic and French party from 1548 to 1560, Mary of Guise, queen regent, not deeming herself secure in Edinburgh. In 1549 the town was walled and fortified by Montalembert, sieur d'Esse, the commander of the French troops, and endured an ineffectual siege in 1560 by the Scots and their English allies. A house in Coalhill is thought to be the "handsome and spacious edifice" erected by Mary of Guise for her privy council. D'Esse's wall, pierced by six gates, was partly dismantled on the death of the queen regent, but although rebuilt in 1571, not a trace of it exists. The old tolbooth, in which William Maitland of Lethington, Queen Mary's secretary, poisoned himself in 1573 to avoid execution for adhering to Mary's cause, was demolished in 1819.

The oldest industry is shipbuilding, which dates from 1313. Here, in 1511, James IV built the "St Michael, "ane verrie monstruous great ship, whilk tuik sae meikle timber that schee waisted all the woodis in Fyfe, except Falkland wood, besides the timber that cam out of Norroway." Charles I is said to have received the first tidings of the Irish rebellion while playing golf on the links in 1641. Cromwell, in his Scottish campaign, built the Citadel in 1650, and the mounds on the links, known as "Giant's Brae" and "Lady Fife's Brae," were thrown up by him as batteries. In 1698 the sailing of the first Darien expedition created great excitement. Notable ships built in Leith include the SS Sirius (1837), one of the first steamships to cross the Atlantic, and the SS Copenhagen, one of the largest rigged ships ever built.

In 1715, William Mackintosh of Borlum (1662-1743) and his force of Jacobite Highlanders captured the Citadel, of which only the name of Citadel Street and the archway in Couper Street have preserved the memory. A mile S.E. of the links lies the ancient village of Restalrig, the home of the Logans, from whom the superiority of Leith was. purchased in 1553 by the queen regent. Sir Robert Logan (d. 1606) was alleged to have been one of the Gowrie conspirators and to have arranged to imprison the king in Fast Castle. This charge, however, was made three years after his death, when his bones were exhumed for trial. He was then found guilty of high treason and sentence of forfeiture pronounced; but there is reason to suspect that the whole case was trumped up. The old church escaped demolition at the Reformation and even the fine east Leixoes window was saved. In the vaults, repose Sir Robert and other Logans. The well of St Triduana, which was reputed to possess wonderful curative powers, vanished when the North British railway was constructed.

St Mary's in Kirkgate, the parish church of South Leith, was founded in 1483, and was originally cruciform but, as restored in 1852, consists of an aisled nave and north-western tower. David Lindsay (1531-1613), its minister, preached there before the king the thanksgiving sermon on the Gowrie conspiracy (1600). John Logan, the hymn-writer and reputed author of The Ode to the Cuckoo, was minister for thirteen years; and in its graveyard lies John Home, author of Douglas, and a native of Leith. Nearby, in Constitution Street, is St James's Episcopal church (1862-1869), built in the Early English style by Sir Gilbert Scott, with an apsidal chancel and a spire 160 ft high. St Thomas's church, at the head of Shirra Brae, was built in the Gothic style in 1843 by Sir John Gladstone of Fasque, who - before he moved to Liverpool, where his son, W. E. Gladstone, was born - had been a merchant in Leith. The public buildings include the custom house (1812) built in the Grecian style; Trinity House (1817), which contains Sir Henry Raeburn's portrait of Admiral Lord Duncan, David Scott's "Vasco da Gama Rounding the Cape" and other paintings; the markets (1818); the town hall (1828), with an Ionic façade on Constitution Street and a Doric porch on Charlotte Street; the corn exchange (1862) in the Roman style; the assembly rooms; exchange buildings; the public institute (1867) and Victoria public baths (1899). Trinity House was founded in 1555 as a home for old and disabled sailors, but became the licensing authority for pilots, and a new sailors' home was established about 1840 in a building adjoining the Signal Tower, and rehoused in a handsome structure in the Scottish Baronial style in 1883-1884. A bronze statue of Robert Burns was unveiled in 1898.

Other industries were engineering, glass-making (began in 1682. At its peak (c.1770) a million bottles were made every week), sugar-refining (established 1757), meat-preserving, flour-milling, sailcloth-making, soap-boiling (the Anchor Soapworks was established around 1680, using whale oil in its production), rope and twine-making, tanning, chemical manures-making, wood-sawing, hosiery, biscuit-baking, brewing, distilling and lime-juice making (Rose's lime juice was founded by Lachlan Rose in Leith in 1868). Leith was the headquarters of the whisky business in Great Britain, and also stored large quantities of wine from Spain, Portugal and France in its capacious warehouses, now largely converted into small businesses and flats. The two old docks (1801-1807) cover Victoria Dock (1852) 5 acres; Albert Dock (1863-1869); Edinburgh Dock (1874-1881); and the New Dock (1892-1901). There are several dry docks, of which the Prince of Wales Graving Dock (1858) is the largest. In 1908 the tonnage of ships entering the harbour was 1,975,457, and that of ships clearing the harbour 1,993,227; 213 vessels were registered at the port (net tonnage 146,799). The value of imports was £12,883,890, of exports £5,377,188. Leith Fort, built in North Leith in 1779 for the defence of the harbour, is now the headquarters of the Royal Artillery in Scotland. Leith is the head of a fishery district.

In the 17th and 18th centuries, Leith Races were held, the theme of a humorous poem by Robert Fergusson. Leith was made a parliamentary burgh in 1832, and was incorporated within Edinburgh in 1920. 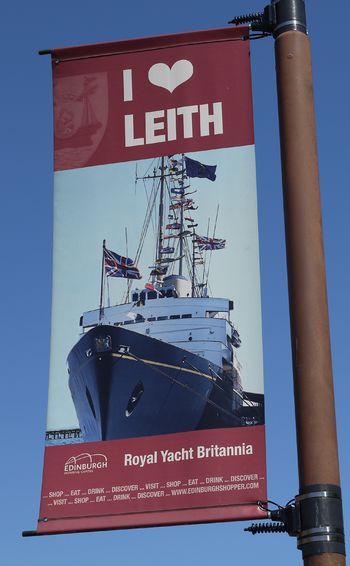 After decades of industrial decline, slum clearance and depopulation, Leith began to revive in the late 1980s. Several old industrial sites were developed with modest, affordable housing, while new small industrial business units were built. The Shore attracted a number of new restaurants, while the once polluted Water of Leith was cleaned up and a public walkway opened.In 1998 the former royal yacht Britannia was permanently moored at the redeveloped wharf in Leith ('Ocean Terminal').

This revival was accelerated by the decision of the Scottish Office (now the Scottish Government) to purchase the disused Old East and Old West Docks as a site for civil service offices in the mid 1990s. Further service and tourist development followed, including the Ocean Terminal complex and the permanently moored Royal Yacht Britannia. From 2011 Ocean Terminal and the Scottish Executive building area will be connected to the new Edinburgh tram network.

In 2004 the owner of the Docks, Forth Ports, announced plans to close the port and carry out a major redevelopment, including about 17,000 new homes. The project includes two large parks and a number of pedestrian linkages across the docks, and is expected to be completed by about 2020.