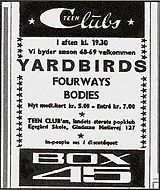 Advertisement in the Copenhagen Berlingske Tidende for Led Zeppelin's (still called 'The Yardbirds') first ever concert, at Gladsaxe Teen Clubs.

The 1968 tour of Scandinavia was a concert tour of Denmark, Sweden, and possibly Norway by the English rock band, Led Zeppelin. The tour commenced on 7 September and completed on 17 September 1968, although there exists unconfirmed reports the band toured until 22 September. It was Led Zeppelin's inaugural concert tour, albeit billed under the moniker the Yardbirds featuring Jimmy Page, during that period.

The Yardbirds disbanded in July of 1968. By August, Page and manager, Peter Grant, had recruited Robert Plant, John Paul Jones and John Bonham to form the 'New' Yardbirds. Their initial tour was a vestigial contractual engagement from the previous Yardbirds line-up. The band's debut performance was at the Gladsaxe Teen Club, Box 45, a social club founded by local young adults wanting a safe place to gather in the evenings, in the Egegård Skole in Copenhagen.[1] Tour manager Jerry Ritz was responsible for shuttling the band between venues, with equipment kept to a minimum to expediate setting up. As manager Grant recalled seeing the band on stage for the first time:

These concerts allowed the band to further work out arrangements for their forthcoming eponymous debut album. As Page explained in an interview for OZ magazine:

Danish photographer Jorgen Angel was the first person to photograph the band performing. He recounted to Hugh Jones in Proximity magazine:

The tour was a critical success, after initial confusion over the Yardbirds name, drawing standing ovations and positive reviews throughout. Because there is a rush to cut an album as soon as they return to England, some of the later Norway dates seem unlikely.

Songs typically played on their first tour included many blues and Yardbirds standards such as 'Train Kept A-Rollin'', 'I Can't Quit You Baby', 'You Shook Me', 'White Summer', and 'For Your Love'. The concerts included soon to be released tracks from their debut album, including 'Dazed and Confused', 'Babe I'm Gonna Leave You', 'How Many More Times', and 'Communication Breakdown'. Other songs thrown in as extended medleys included Elmer Gantry's 'Flames' and Garnett Mimm's 'As Long As I Have You'.[5]