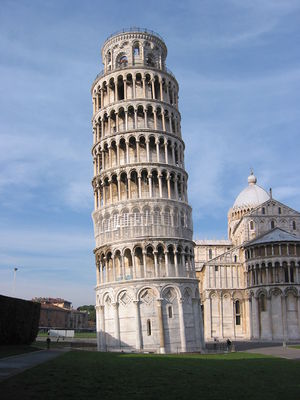 (CC [1]) Photo: Paul Mannix
The Leaning Tower of Pisa in front of the city's cathedral

The Leaning Tower of Pisa is a 56m high bell tower in the Italian city of Pisa. Built in the 12th century, the tower is a world famous landmark. Even during construction the tower began to lean and over the centuries it has become exaggerate. In the late 20th century it was feared that the increasing lean was putting the tower at risk of collapse, and in 1990 it was closed to the public while remedial work was undertaken. It reopened in 2001.[1]

The lean for which Pisa's bell tower is famous was noticed during construction. The builders attempted to compensate for the lean, resulting in the tower being slightly bent. Measurements of the lean were infrequent before the 20th century, at which point there was great concern about the future of the building and it was regularly monitored.[2] In 1987, the Piazza del Duomo was designated a World Heritage Site by UNESCO; amongst the monuments included in site are the Leaning Tower of Pisa and the city's cathedral.[3]