The law of diminishing returns is an abstract concept in economic theory. It states that the output per input (productivity) declines if the input of a production factor is increased over a certain limit. It has two versions, one of which is a tautology and the other of which lacks empirical support.

In classical economics the law states that the highest productivity is gained when there is an optimal proportion between the factors of production. Any divergence from that proportion will result in lower productivity. It is a tautology, being no more than a restatement of the implied definition of the term "optimum".

If one production factor is fixed, the proportion between the production factors will change with rising production i.e. rising input of the variable factor. According to the classical LDR this leads to a production function that has three phases with the following characteristics:

Historically the concept was first developed by Anne Robert Jacques Turgot. It was mainly related to agricultural production and the use of labour and later fertilizer in relation to a fixed amount of soil.[1] 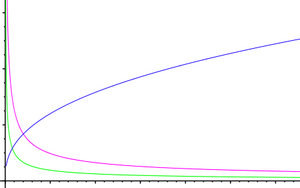 In neoclassical economics the concept signifies that an increasing input of any production factor will result in diminishing marginal productivity. This leads to a production function with the following characteristics:

The origins of the neoclassical production function i.e. the neoclassical concept date back to the time of classical economics. Then the concept was used to describe the effect of an increase in wheat production where good soils were limited. To increase the production of wheat inferior soils would have to be used, which would deliver less wheat for the same amount of labour.[2]

The neoclassical concept is a necessary condition for the existence of a stable equilibrium in the abstract theory of general equilibrium, which assumes that the production function is convex. It has no known "real world" implications.

In the 1920s, the economist Piero Sraffa criticised the concept for its failure to take account of competition among producers and their suppliers[3], deeming it to be "so weak as to be unable to support the weight imposed upon (it)", and in the 1960s the eminent economist. Joan Robinsom has described the mathematical statement of the production function as "a powerful instrument of miseducation". [4] The argumentation on which the neoclassical LDR is based assumes that there are units of a factor with different quality and/or there are fields of application of the factor with different productivity.[5]

Tho most prominent production function for creating such a graph is the Cobb-Douglas production function: Y = A × Ca × Lb, where Y stands for yield, C for capital, L for labour, and A, a and b are constants that can be interpreted as A for technology level and a and b for the production elasticities of the factors. This formula can contain elements of both concepts, the classical and the neoclassical LDR.

For an interactive demonstration of the Cobb-Douglas production function see: [1]