The Kruger National Park, South Africa is located in the lowveld and situated between the vast Mozambique coastal plains and the towering Drakensberg mountain range. 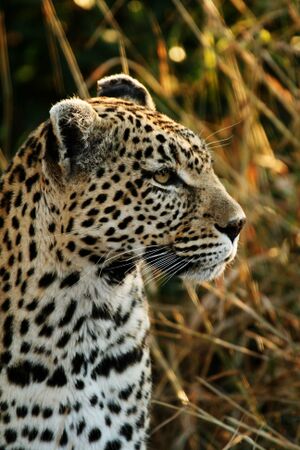 The Kruger Park consists of approximately 20,000 square kilometers which is an area larger than either Wales or Israel [1]. Park habitats range from high rainfall mountain to semi-arid plains. Summers in the Kruger are hot with erratic rainfall. Winters are generally temperate and dry. Average rainfall is approximately 500 mm per annum[1]

There are approximately 2000 plant species found in seven basic vegetation eco-systems in the Kruger Park, although within each of these plant diversity and abundance can vary greatly.From the Pafuri gate in the far Northern Makuleke region to the Malelane gate in the far south is over 440 km[1]. Plant diversity and species prevalence is generally driven by rainfall and underlying geology. There have been at least 30 different types of botanical communities recognized in the park[1].

An Impala ewe in the Kruger.

The Kruger National Park contains remains of dinosaurs dating back to Triassic and the sandstones of the far North record the presence of great deserts of the Jurassic that dominated the region almost 200 million years ago[2]. Archeologically throughout the park there is evidence of early hominin occupation including handaxes dating back to around 1.5 million years ago, tools of the Middle and Late stone age as well rock art [2]. 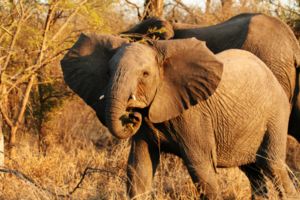 One of the archeological highlights of the Kruger park is the stone-walled city of Thulamela in the far North. Thulamela was the political capital of an Iron age kingdom that thrived in the region between 1200 and 1640 AD[2].

By the mid-1800’s wildlife in the area that would become Kruger had been decimated by over-hunting in an un-regulated environment[1]. Rinderpest in 1896 further decimated wildlife. Then president of the Transvaal Boer Republic, Paul Kruger, proclaimed the 4,600 hectare Sabie Game Reserve in 1898 and then the Shingwedzi Reserve which stretched between the Shingwedzi and Luvuvhu Rivers[1].

Bull elephant in the Kruger park.

In 1902 James Stevenson-Hamilton was appointed as head ranger of both reserves and quickly earned the nickname “Skukuza”(He who sweeps clean) for his vigorous anti-poaching and anti-farming methods and the forced removal of people living in the reserves[1].[3]. The reserves were merged in 1926 by the purchase of the seventy farms lying between them and the Kruger National Park was proclaimed. The park was opened to tourism in 1927[1][3]. By 1969 the park had been fenced by approximately 18,000 kilometers of wire fencing[1]. In 2002 kruger park was incorporated into the Greater Limpopo Transfrontier Park when an agreement was signed between South Africa, Zimbabwe and Mozambique to merge conservation areas in their respective countries. Once this process is completed the Transfrontier park will be the largest game reserve in the World[3].

There are many species of larger mammals in the Kruger park that form the basis of the mammalian ecosystem. In particular the larger browsing and grazing animals effect the distribution and density of the plant community [4]. The following is a list of selected non-carnivore larger mammals[4][1]. 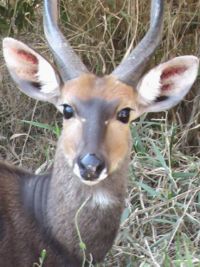 Male bushbuck in the Kruger park.

There are more than 520 recorded species of bird recorded in the Kruger Park of which approximately 380 are resident in the park year round[1].

There are 54 snake species found in the Kruger, 9 of which are highly venomous to humans. Crocodiles are found in all eight major rivers[1].

Parts of Kruger, particularly the far north are considered moderate to high risk malaria areas. Malaria is at its peak during the rainy season roughly between October and May. 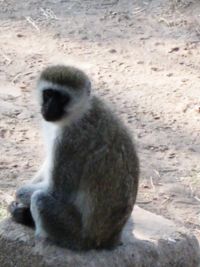 A vervet monkey in the Kruger park. 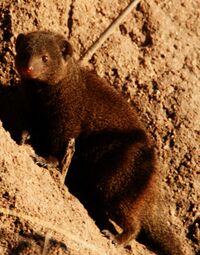 Dwarf mongoose in the Kruger park.

Impala rams in the Kruger park.