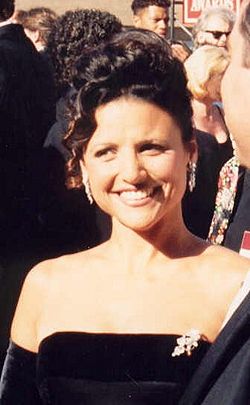 Julia Elizabeth Louis-Dreyfus was born in 1961 to Gérard Louis-Dreyfus, a French billionaire who runs the Louis-Dreyfus Group and who emigrated to the United States in the 1940's, and the former Judith Bowles. Her parents divorced shortly after her birth, and both remarried therafter, with each marriage producing two half-siblings apiece, including actress Lauren Bowles. She was discovered by Saturday Night Live's producers doing improv in Chicago with future husband Brad Hall, and both became cast members during the 1982-1982 season. Hall was let go in 1984, as was Louis-Dreyfus and the entire rest of the cast the following year, after producer Dick Ebersol stepped down and original producer Lorne Michaels returned.

Miss Louis-Dreyfus ventured into film following her sacking from SNL, appearing in three films in 1986: Troll, Hannah and Her Sisters and Soul Man. In 1988, she began a two-year stint playing the snooty Eileen Swift on the half-hour sitcom Day by Day. Following its cancellation, she appeared in the movie National Lampoon's Christmas Vacation, then was brought in by Larry David and Jerry Seinfeld to add a female presence to the otherwise all-male cast of Seinfeld. Playing the character Elaine Benes, she went on to win one Emmy award (in 1996, for Outstanding Supporting Actress in a Comedy Series), one Golden Globe award (in 1994, for Best Performance by an Actress in a Supporting Role in a Series) and two Screen Actors Guild awards (in 1997 and 1998 for Outstanding Performance by a Female Actor in a Comedy Series). Oddly, despite the popularity of Seinfeld, she never won a People's Choice award.

Following the end of Seinfeld's nine-year run, Louis-Dreyfus took on voice-over roles in the film A Bug's Life (1998) and the TV movie Animal Farm (1999), based on the George Orwell book. Following a turn as The Blue Fairy in 2000's TV movie Geppetto, she and her husband began developing a new sitcom that he would produce and she would star in. Initially titled 22 Minutes with Eleanor Riggs, the show, renamed Ellie Riggs, was a failure, lasting less than a full season before cancellation. Determined to prove "The Seinfeld Curse" wrong (both Jason Alexander's and Michael Richards's post-Seinfeld shows had failed before Ellie Riggs went on the air), Louis-Dreyfus tried again in 2006, playing single mother Christine Campbell in CBS sitcom The New Adventures of Old Christine. This time she hit paydirt, with the show becoming both a commercial and critical success during its first season. That first season was capped off with wins at the Emmys (for Outstanding Lead Actress in a Comedy Series in 2006) and her first two People's Choice Awards nominations (for Favorite Female TV Star and Favorite Funny Female Star, in 2007).

Miss Louis-Dreyfus has been married since 1987 to television writer and producer Brad, with whom she has two sons: Henry (born 1992) and Charles (born 1997). The family lives in Santa Monica, California. Both Louis-Dreyfus and Hall are involved in environmental activism.