The journal impact factor, very often abbreviated IF (dropping the journal in its name), is a measure of the citations to science and social science journals.[1][2] It is frequently used as a proxy for the importance of a journal to its field. 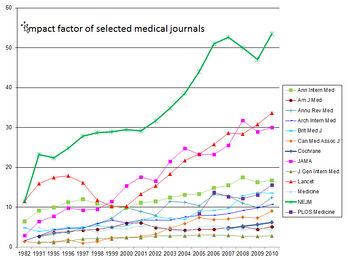 The Impact factor was devised by Eugene Garfield, the founder of the Institute for Scientific Information, now part of Thomson, a large worldwide US-based publisher. Impact factors are calculated each year by the Institute for Scientific Information for those journals which it indexes, and the factors and indices are published in Journal Citation Reports. Some related values, also calculated and published by the same organization, are:

It is however possible to measure the Impact factor of the journals in which a particular person has published articles. This use is widespread, but controversial. Eugene Garfield warns about the "misuse in evaluating individuals" because there is "a wide variation from article to article within a single journal".[3]

Impact factors have a huge, but controversial, influence on the way published scientific research is perceived and evaluated.

(note that the 2003 impact factor was actually published in 2004, because it could not be calculated until all of the 2003 publications had been received.)

A convenient way of thinking about it is that a journal that is cited once, on average, for each article published has an IF of 1 in the equation above. There are no articles to be averaged, just the one article.

There are some nuances to this: ISI excludes certain article types (such as news items, correspondence, and errata) from the denominator.[4] New journals, that are indexed from their first published issue, will receive an Impact Factor after the completion of two years' indexing; in this case, the citations to the year prior to Volume 1, and the number of articles published in the year prior to Volume 1 are known zero values. Journals that are indexed starting with a volume other than the first volume will not have an Impact Factor published until three complete data-years are known; annuals and other irregular publications, will sometimes publish no items in a particular year, affecting the count. The impact factor is for a specific time period; while it is appropriate for some fields of science such as molecular biology, it is not for such subjects with a slower publication pattern, such as ecology. It is possible to calculate the impact factor for any desired period, and the web site gives instructions. Journal Citation Reports includes a table of the relative rank of journals by Impact factor, in each specific science discipline, such as organic chemistry or psychiatry.

The JIF can be calculated for journals not include in the JIF report.[5]

It is sometimes useful to be able to compare different journals and research groups. For example, a sponsor of scientific research might wish to compare the results to assess the productivity of its projects. An objective measure of the importance of different publications is then required and the impact factor (or number of publications) are the only ones publicly available. However, it is important to remember that different scholarly disciplines can have very different publication and citation practices, which affect not only the number of citations, but how quickly, after publication, most articles in the subject reach their highest level of citation. In all cases, it is only relevant to consider the rank of the journal in a category of its peers, rather than the raw Impact Factor value.

Impact factors are not infallible measures of journal quality.[6][7] For example, it is unclear whether the number of citations a paper garners measures its actual quality or simply reflects the sheer number of publications in that particular area of research and whether there is a difference between them. Furthermore, in a journal which has long lag time between submission and publication, it might be impossible to cite articles within the three-year window. Indeed, for some journals, the time between submission and publication can be over two years, which leaves less than a year for citation. On the other hand, a longer temporal window would be slow to adjust to changes in journal impact factors. Thus, The impact factor is appropriate for some fields of science such as molecular biology, it is not for such subjects with a slower publication pattern, such as Ecology. (It is possible to calculate the impact factor for any desired period, and the web site gives instructions.)

Favorable properties of the impact factor include:

The most commonly mentioned faults of the impact factor include:[6][7]

For discussion of alternatives to the impact factor, see academic journal.

A journal can adopt editorial policies that increase its impact factor. [16] These editorial policies may not solely involve improving the quality of published scientific work. Journals sometimes may publish a larger percentage of review articles. While many research articles remain uncited after 3 years, nearly all review articles receive at least one citation within three years of publication, therefore review articles can raise the impact factor of the journal. The Thomson website gives directions for removing these journals from the calculation. For researchers or students having even a slight familiarity with the field, the review journals will be obvious.

Publication by journals of industry-supported randomised trials may increase the impact factor.[17]

Editorials in a journal do not count as publications. However when they cite published articles, often articles from the same journal, those citations increase the citation count for the article. This effect is hard to evaluate, for the distinction between editorial comment and short original articles is not obvious. "Letters to the editor"" might refer to either class.

An editor of a journal may encourage authors to cite articles from that journal in the papers they submit. The degree to which this practice affects the citation count and impact factor included in the Journal Citation Reports cited journal data must therefore be examined. Most of these factors are thoroughly discussed on the site's help pages, along with ways for correcting the figures for these effects if desired. However,it is normal for articles in a journal to cite primarily its own articles, for those are the ones of the same merit in the same special field. If done artificially, the effect will only be significant for the journals with the lowest citations, and affect the placement only at the bottom of the list.

For example, we have analysed the citations of individual papers in Nature and found that 89% of last year’s figure was generated by just 25% of our papers. The most cited Nature paper from 2002−03 was the mouse genome, published in December 2002. That paper represents the culmination of a great enterprise, but is inevitably an important point of reference rather than an expression of unusually deep mechanistic insight. So far it has received more than 1,000 citations. Within the measurement year of 2004 alone, it received 522 citations. Our next most cited paper from 2002−03 (concerning the functional organization of the yeast proteome) received 351 citations that year. Only 50 out of the roughly 1,800 citable items published in those two years received more than 100 citations in 2004. The great majority of our papers received fewer than 20 citations.

This emphasizes the fact that the impact factor refers to the average number of citations per paper, and the probability distribution of that number is not Gaussian. Most papers published in a high impact factor journal will ultimately be cited many fewer times than the impact factor may seem to suggest, and some will not be cited at all. Therefore the Impact Factor of the source journal should not be used as a substitute measure of the citation impact of individual articles in the journal.

Use in scientific employment

Though the impact factor was originally intended as an objective measure of the reputability of a journal (Garfield), it is now being increasingly applied to measure the productivity of scientists. The way it is customarily used is to examine the impact factors of the journals in which the scientist's articles have been publisher. This has obvious appeal for an academic administrator who knows neither the subject nor the journals. A novel factor called the H-factor, invented by Hirsch, seems more appropriate to describe the impact of individual scientists. If a scientist has published n articles which all have been cited at least n times, then he will have a H-factor of n. The advantage is that it rewards publication of many good articles but not many lousy articles, and it is difficult to increase the H-factor by self citations. It also describes your actual impact and not the journals you are publishing in. One or few lucky "punches" will not alone give a high H-factor. The disadvantage is that the H-factor first becomes reliable when you have a substantial production, similar to assistant/associate professor level. It is also important to emphazise that a single number would never be perfect to describe a scientist, just as IQ does not tell everything about intelligence, but the H-factor is one of the best tries.