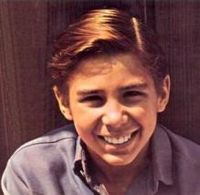 Johnny Crawford in the early 1960s.

Johnny Crawford (March 26, 1946 in Los Angeles, California) is a former Emmy-nominated child actor and singer, best known for his co-starring performance as Chuck Connor’s screen son in the long running television Western show The Rifleman (1958-64). He was also one of the original "Mousketeers" in the first season of the The Mickey Mouse Club (1955-59).

After The Rifleman ended in 1964 and his singing career started to fade away, Crawford continued guest starring on TV shows and movies. In addition, right after his graduation in the summer of 1964, he left for Texas to become a rodeo cowboy. As a member of the PRCA (Professional Rodeo Cowboys Association) and the AJRA (American Junior Rodeo Association) he competed frequently at rodeos throughout the country during the 1960s and early 1970s.