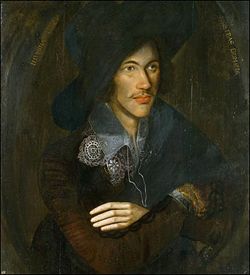 John Donne was a leading metaphysical poet and preacher. He lived from about 1572 to 31 March 1631. His poetic work included love poems, satires and religious verse. Both his poetry and his sermons evince a powerful and witty intellect.

He was born in London in late 1571 or the first half of 1572. His family were Roman Catholics, and therefore suffered from discrimination and legal disadvantages. His father was a leading member of one of the London guilds - the Ironmongers Company - but died in 1576. His mother Elizabeth was the daughter of a playwright, John Heywood, sister of a Jesuit, and great-niece of the Catholic Martyr Thomas More. Soon after her husband's death, Elizabeth married a wealthy doctor, John Syminges. Within a few years three of Donne's young siblings died. At the age of 11, Donne entered the university of Oxford: Catholic children often went very young to university because this sidestepped some legal barriers Catholics faced. He left without taking a degree, because he would have had to swear the Oath of Supremacy, which included an acknowledgement that Elizabeth I was head of the church. It is possible he went on to the University of Cambridge and then travelled abroad. In 1592 he entered Lincoln's Inn, one of the Inns of Court in London, to study law. The following year his brother Henry was arrested for sheltering a Catholic priest - Henry died in prison. After this he started to drift away from the Catholic church.

In 1596 and 1597 he took part in expeditions against the Spanish, the main Catholic power. On his return he was appointed secretary to a senior government minister, Sir Thomas Egerton, Keeper of the Great Seal. He was now at the centre of power. He was by now known as a womaniser. He met and fell in love with Egerton's niece, Anne More, and, against the wishes of her family, he and Anne married in secret in 1601. This brought on him the wrath of Egerton, and what might have been a successful and prosperous career came to an end. Because of the marriage, Donne was briefly imprisoned. Izaak Walton, who wrote a life of Donne, says that Donne quipped, "John Donne, Anne Donne, undone." 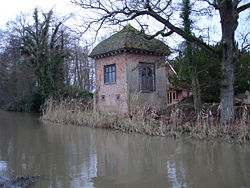 Part of the house where John Donne lived in Pyrford

Now impoverished, he lived at a home provided by one of his wife's cousins in Surrey, scraping an income through practice of law. His financial position was not helped by the number of children Anne bore him. Several were stillborn, and several died in early childhood. In 1602 he became a Member of Parliament. He relied heavily on gifts from rich friends, and wrote a number of poems to order. For some years he pleaded for a government position but this was denied him. The King, James I, was impressed by some of his anti-Catholic writings and urged him to take holy orders, but Donne was very hesitant about this. The family moved to London, but, despite Donne's continuing efforts, he failed to secure secular preferment.

In 1615 Donne finally took holy orders and became a royal chaplain. He quickly gained a strong reputation for his preaching. In 1616 he was appointed Reader in Divinity at Lincoln's Inn, and he also held two clerical livings. Financially he was at last relatively secure. But in 1617 his beloved wife Anne died after the birth of a stillborn child. Izaak Walton says that emotionally Donne never recovered from this.

In 1619 Donne travelled in Europe as chaplain to Viscount Doncaster, whom James I sent to try and bring peace between the protestants of Bohemia and the Catholic German emperor. After his return to England in 1620, Donne became Dean of St Paul's, a position he held until his death. In 1623 he had a near-fatal illness. In 1624 he became vicar of St Duinstan-in-the West in London, and he was appointed a chaplain to Charles I the following year. He now had a large income. He died in 1631, possibly from stomach cancer, and was buried in St Paul's Cathedral, London.

Donne's poetry circulated largely in manuscript in his lifetime, and after he became Dean of St Paul's, he made some effort to suppress his earlier verse, which he regarded as unsuited to a gentleman of the cloth.

Between 1593 and 1598 he worked on a set of satires, one of which shows him exploring the religious dilemmas of the age. While written in rhyming couplets, the language and syntax is often convoluted and - in contrast to later satirists like John Dryden and Alexander Pope - he did not use rhyme to add punchy conclusions to thoughts: instead, elaborate sentences run across rhymes at the end of lines into the next line.

His later poems tend to be more preoccupied with religion. In the Holy Sonnets he uses the techniques of his love poems to produce powerful and concentrated religious poems.

Donne's first major prose work was Biothanatos, a treatise on Christianity and suicide, written in 1607 at a time when he was himself depressed, but not published until after his death. In 1610 appeared 'Pseudo-Martyr, intended to help persuade Catholics to take the Oath of Supremacy; in 1611 appeared a satire on the Jesuits, Ignatius His Conclave. Both works attracted the approval of James I, and were instrumental in securing Donne a secure career as a priest a few years later.

After his near-fatal illness in 1623, he wrote Devotions upon Emergent Occasions, which includes meditations relating to death including the famous passage beginning "Perchance he for whom the bell tolls..."

His numerous sermons show a witty and omnivorous mind, and are as full of passion and rhetorical conceits as his poems. A number were preached at court.

Donne's reputation as a poet was high in his lifetime, and this led to patrons giving him gifts in return for specially-written poems when he was not well-off. As a preacher he was regarded as powerful and intellectually dexterous.

In the second half of the seventeenth century, tastes changed, and a more "classical" style came into favour. Donne's poetry was regarded as "rough". One of the most popular anthologies of the nineteenth century - Palgrave's Golden Treasury - contained not a single poem by Donne in its first edition. It was only in the twentieth century that his reputation fully recovered and he came once again to be seen as one of the greatest poets writing in English.

Unlike his friend and contemporary Ben Jonson who closely oversaw the printing of his works, ('Workes', 1616) Donne avoided as much as possible to have his work printed. In a letter to Henry Goodyer in 1609 he wrote that he sought "a graver course then a Poet", by which he meant that writing poetry was not a thing a respectable gentleman would do... So, he preferred to circulate his manuscripts among his friends and not give it to the masses. The few printed works that appeared during his lifetime were printed at the request of his friends because they were always the first to whom he had read his poems and it was in that small, intimate circle of privileged readers that his fame as a poet began to rise. As a result of his reluctance to have his poems printed in his lifetime only the two 'Anniversaries on the death of Elizabeth Drury' were printed in an authorised version in 1611, and the accompanying 'Funerall Elegie' in 1612. Probably it was Elizabeth's father Robert Drury who was acting as Donne's patron. Even then Donne avoided to have his name printed on the title page. In 1614, before entering Holy Orders, Donne gave permission to print a collection of his poems after being pressed to do so by the Earl of Somerset, one his patrons. He saw to it that it was printed in small numbers and preferred to give it away as a present to friends and potential patrons. For the rest of his life his poems would only circulate as copies of his manuscripts and after 1615 no single poem of his appeared in print before he died.

The same fate awaited most of Donne's prose writings. During his lifetime only nine of his prose works were printed: six of them were sermons, and three of them were on royal commission. Of these nine works, there were only seven that mentioned his name as the author on the title page: Devotions upon Emergent Occasions (1624) and the six sermons. The latter were published separately in small editions between 1622 and 1627. Furthermore, two anonymous works were printed: Pseudo-Martyr (1610) and Ignatius His Conclave (1611) in both Latin and English editions. Donne was constantly on guard not to be mistaken for a professional writer. While making poetry was considered a suitable occupation for a gentleman, having it printed and sold was certainly not. But above all he wanted to be admired and honored for his gravitas, a serious and dignified attitude befitting a lord of his state. Of course it is possible that especially his erotic poetry could indeed be experienced as offensive, as well as the political and theological issues he put in it. However, above all, Donne had to be careful not to scandalize his patrons and to make a good impression. Nevertheless, manuscripts of his work even penetrated into the royal court.