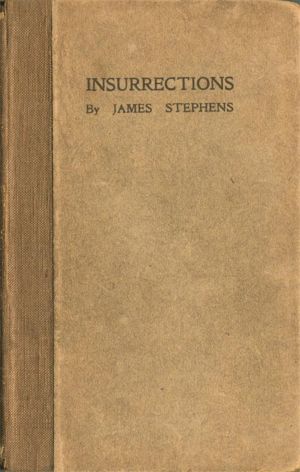 Cover of the first edition of Stephens's first book, Insurrections, published by Maunsel & Co. in Dublin in 1909

James Stephens (February 9, 1882–December 26, 1950) was an Irish novelist and poet. Stephens was principally known for his many retellings of traditional Irish myths and legends. His versions are marked by a rare combination of humor and lyricism (Deirdre, and Irish Fairy Tales are often singled out for praise). He also wrote several books (The Crock of Gold, Etched in Moonligh, The Demi-Gods) which are fiction, but loosely based on fairy tales. "The Crock of Gold," in particular, achieved enduring popularity, and was frequently reprinted throughout the author's lifetime. He was also a noted poet.

Stephens began his career as a poet under the tutelage of "Æ" (George William Russell); his first book of poems, Insurrections, was published in 1909 in Dublin by Maunsel & Co.. The book was dedicated simply, "To Æ, these." He continued to write poetry throughout his long career, and his last book, "Kings and the Moon" (1938), was also a volume of verse. In the 1930's Stephens had some acquaintance with James Joyce, who found that they shared a birth year (and, Joyce mistakenly believed, a birthday). Joyce, who was concerned with his ability to finish what would later become Finnegans Wake, proposed at one point that Stephens assist him, with the authorship credited to JJ & S (James Joyce & Stephens, also a pun for the popular Irish whisky made by John Jameson & Sons). The plan, however, never came to fruition, as Joyce was able to complete the work on his own. In the last decade of his life, Stephens found a new audience through a series of broadcasts on the BBC.