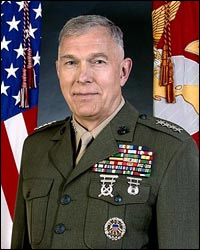 He has been an advocate of reemphasizing Afghanistan and combat operations for Marines, rather than nation-building in Iraq. [1] Conway, while agreeing that there will never be another Second World War style "forcible entry" amphibious attack such as the Battle of Tarawa or the Battle of Normandy, has made the point the goal of amphibious operation -- can be many and multiple. "There are many types of amphibious operations. But if you're talking about a forcible entry into a nation, the purpose of the amphibious operation is to establish a foothold. ...Amphibious operations, again, can involve non-combatant evacuations; can involve humanitarian assistance, disaster relief. It really runs the whole gamut from peacetime sort of engagement all the way up to forcible entry. ... if you look at the number of ships that are required to do both, if we simply satisfy what the combatant commanders tell us today they need in terms of amphibious ships, that gives us the number we need if we would ever have to bring those ships together in order to be able to conduct a forcible entry. So we think that's it's -- it's, again, a dual capacity that the nation really has to hang onto. "[2]

Prior to taking his present post in 2006, he was Director of Operations (J-3) for the Joint Staff under the Chairman of the Joint Chiefs of Staff, after commanding I Marine Expeditionary Force (I MEF) and the Marine Corps University.