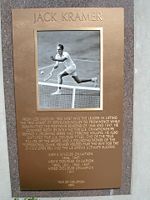 John Albert ("Jack") Kramer (August 1, 1921, Las Vegas, Nevada – September 12, 2009, Los Angeles, California) was a U.S. tennis player of the 1940s and 1950s. A World No. 1 player for a number of years, he is a strong candidate for the title of the greatest tennis player of all time. He was also, for many years, the leading promoter of the professional tennis tours and a relentless advocate for the establishment of Open tennis between amateur and professional players. When the Association of Tennis Professionals was founded in 1972 he was the first executive director and in that role was the leader of an ATP boycott of Wimbledon in 1973. Tall and slim, he was the first world-class player to play a consistent serve-and-volley game, in which he came to the net behind all of his serves, including the second serve. He was particularly known for his powerful serve and forehand, as well as his ability to play "percentage tennis", in which he maximized his efforts on certain points and certain games during the course of a match.

Kramer was the son of a blue-collar railroad worker for the Union Pacific railroad. As a boy he was a fine all-round athlete, particularly in basketball and tennis. When he was 13, the family moved to San Bernardino, California. The following year the youthful Kramer saw Ellsworth Vines, then the world's best player, play a match: "And here is Ellsworth Vines, 6'2-1/2" tall, 155 pounds, dressed like Fred Astaire and hitting shots like Babe Ruth." Kramer made up his mind on the spot to concentrate on tennis.

Within a year Kramer was playing junior tournaments and taking lessons from a leading professional, Dick Skeen. Because of his obvious ability, in spite of his family's lack of money he had also come under the guidance of Perry T. Jones, the leading member of the Los Angeles Tennis Club and of the Southern California Association, the centers of American tennis in the 1930s. Kramer commuted many hours each day from his new home in Montebello to play at the LATC and the Beverly Hills Tennis Club, sometimes with such great adult players as Vines and Bill Tilden. He was the national boys' champion in 1936 and the winner of the 1938 Interscholastics. He was also competing occasionally in men's tournaments on grass courts in the East and winning matches against nationally ranked men such as Elwood Cooke.

In his 1979 autobiography, Kramer calls Helen Wills Moody the best women's tennis player he ever saw. He also writes that when he was "the national boys' champion, fifteen years old," he played a match against her. "She was the champion of the world at the time - she won seven Forest Hills and eight Wimbledons.... I beat her, but Helen played a good game."

Kramer attended Rollins College in Winter Park, Florida, and played on the tennis team there for at least the 1941 and 1942 seasons.

Kramer was inducted into the International Tennis Hall of Fame in Newport, Rhode Island, in 1968.