Most people referred to him as J. B. S. Haldane (or J.B.S.), sometimes 'Jack', the initials standing for John Burdon Sanderson ('Burdon Sanderson' from his maternal line; 'John', his father's name), born in Oxford, England, in 1892, his father an accomplished and honored (respiratory) physiologist, John Scott Haldane (J. S. Haldane),[1] with whom J.B.S. worked as his laboratory assistant during childhood.[2][3] J.B.S. Haldane's work earned him a reputation as a renown chemical, mathematical and population geneticist; enzyme kineticist; science visionary; and, popularizer of science. He produced some 23 books, 400 scientific articles, and over 1000 popular science articles.

In his history of the personal life of J.B.S. Haldane, historian Ronald Clark opens with this description:

In his autobiography,[3] Haldane states that "At school I deserted 'classics,' that is to say, the study of Latin and Greek, at the age of fourteen and studied chemistry, physics, history, and biology, with my father's full backing but to the annoyance of the headmaster, who said I was becoming 'a mere smatterer.'"

He attended Eton College[5] and, later, Oxford University, receiving 'firsts' in mathematics and in literate humaniores (Latin and Greek classics, modern philosophy, and history), earning his undergraduate degree in 1914, graduating with honors. He served in combat in World War I, and later taught and did research at Oxford (1919-1922, elected Fellow in physiology), Cambridge (1922-1932), John Innes Horticultural Institution (as consulting geneticist, 1926-1936), and University College London (1933, appointed professor of genetics; 1937, appointed Weldon Chair in Biometry, whereupon the university eliminated the genetics chair, Haldane purportedly remarking "probably because I discovered linkage in man when I should have been asking millionaires for money.”)[6], and for a short time at the University of California at Berkeley.

In 1932 J.B.S. Haldane published The Causes of Evolution, a founding document in the modern evolutionary synthesis of population genetics — reconciling Mendel's laws of heredity and Darwin's theory of evolution by means of natural selection. The book reflects the interest he developed in his father's laboratory and in college applying mathematics to questions in biology.[2]

In a review of a biography of JBS Haldane, geneticist Edmond Murphy wrote:

”If J.B.S. Haldane had not existed it would have been necessary to invent him. He is one of those figures, like Adam, Moses, Hippocrates, Homer, Socrates, King Arthur, and Robin Hood, which so embody a crisis of an age (but not its platitudes) that sooner or later historians take to doubting their literal existence. I have the makings of a thesis that Haldane was probably invented by Arthur Clarke…. Haldane is an example of the strict meaning of the word prophet: one that saw the present so clearly as to be thought to have foreseen the future. His life is the embodiment of a crisis in scholarship, the decay of the classical mind, and the rise of the sharper, but narrower, empirical professions.” [7]

This article will give a summary of J.B.S. Haldane's life and thinking, his contributions to science and to the popularization of science, his impact on his times, and his vision of the future. One science historian, Mark B. Adams, sets the task:

"J.B.S. Haldane (1892-1964) is one of the most fascinating, perplexing and troublesome figures in the history of science. That he was a major biologist of his time goes without saying, but attempts at further scientific classification are futile: there is hardly a field of modern biology in whose history he does not deserve at least some mention. And, beyond biology proper, Haldane had yet other personae that at times seemed no less central to his career. Any attempt to come to terms with his life and work must face the dual challenge of his extraordinary multiformity and his utter singularity." [8]

As a child J.B.S. Haldane learned much of his father's 'trade', human physiology, essentially as an non-indentured apprentice. He states in his "An Autobiography in Brief":

At the age of eight or so I was allowed to take down numbers which I called out when reading the burette of a gas-analysis apparatus and later to calculate from these numbers the amounts of various gases in a sample. After this I was promoted to making up simple mixtures for his use and, still later, to cleaning apparatus. Before I was fourteen, he had taken me down a number of mines, and I had spent some time under water both in a submarine and in a diving dress. He had also used me as the subject in many experiments. In fact I spent a good deal of my holidays from school in learning my father's trade…After I was twelve, he discussed with me all his research before publication, and sometimes tried out a lecture course on me before delivering it to students.[3]

His father J. S. Haldane also introduced him to genetics early on, at age eight years, when he accompanied his father to hear a lecture by the geneticist, A. D. Darbishire, about the rediscovery of Gregor Mendel's laws of heredity.[9] Not surprisingly, the younger Haldane pursued the science of genetics throughout his life.

By age fourteen years he had apparently learned about gases and human respiratory physiology, learned mathematical applications for interpreting experimental data, and from discussions with his father, learned about presenting research results for publication, and about developing lecture courses. (For more on J.B.S. Haldane's father's life and scientific work, see[1])  J.B.S. Haldane had a head start in science and scientific thinking, leading him in school to complement his studies of Latin and Greek with studies of physics, chemistry and biology — and history.[3]. 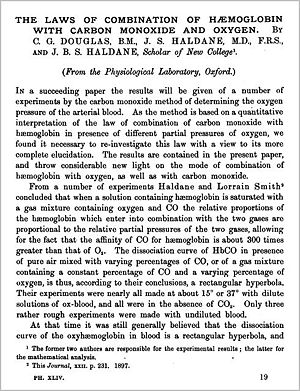 Through his study of chemistry, he reportedly had learned about advances in chemical knowledge that helped his father and colleague, C. G. Douglas, in their research. His first scientific paper, at age seventeen years (1909), co-authored with his father and C. G. Douglas, was read to the Physiological Society, likely what appeared in the Journal of Physiology in 1912, as Douglas CG, Haldane JS, Haldane JB. (1912) The laws of combination of haemoglobin with carbon monoxide and oxygen. J. Physiol 44:275-304.[10]  It reflected physiology at the mathematical and chemical level. J.B.S. Haldane had achieved credentials as a scientist with sophisticated mathematical ability by age twenty years, and he followed up in the years ahead with mathematical perspectives applied in enzymology and population genetics (vide infra).

What is most remarkable about Haldane is the extent to which he contributed to a wide and disparate variety of fields. [above reformatted as bullets]

Early on (1925), at Cambridge University, Haldane applied his early-acquired and life-long passion for mathematical analysis of biological chemistry to the field of enzymology. Enzymologists study the behavior of enzymes, the protein catalysts that accelerate biochemical reactions in living cells without themselves getting consumed in the reactions. Among other studies, enzymologists generate schematic and mathematical models of the many different kinds of biochemical reactions catalyzed by enzymes. With a colleague, George E. Briggs, Haldane presented a theoretical analysis of enzyme catalyzed reactions that could account for quantitative measurements of the rates of many of such reactions ('enzyme kinetics'). Briggs and Haldane used a different reaction equation and a more generally applicable assumption about the process of enzyme catalyzed reactions compared to the earlier model presented by Michaelis and Menten — specifically, they presented the mathematics of quasi-steady-state relationship of the enzyme-substrate complex whereas Michaelis and Menten analyzed the reactions at equilibrium.[11] The Briggs-Haldane analysis remains the standard approach to enzymatic reaction ‘kinetics’, and has set a foundation for, and stimulated, the further developments in that field up to the 21st century.[12][13]

For a description of the Briggs-Haldane modification of the Michaelis-Menten analysis see the original publication,[11] or online, see Palmer,[14] or Sarkar.[15]

In the early 20th century, Darwin's theory of evolution by means of natural selection did not have a large following among biologists. The general skepticism declined when, in the early 1930s, independent mathematical considerations by R. A. Fisher, Sewall Wright, and J.B.S. Haldane showed convincingly that, in ideal populations of organisms that transmitted traits in accordance with Mendel’s laws of inheritance and Darwin-Wallace's theory of natural selection could account for the evolution of the population in respect of those traits. At once that triumvirate of biologists, using mathematical arguments, reconciled Mendelism and Darwinism, gave strong credence to the role of natural selection as the basis for evolution, and founded the discipline of population genetics, a discipline that put on a mathematical and theoretical footing a methodology for studying the changes in the frequencies of gene alleles — trait determinants — in populations.