The Irish Famine in the British-controlled island of Ireland, 1845-49, was a catastrophic failure in the food supply that led to approximately a million deaths, vast social disruption and to massive emigration. It transformed the economy of Ireland, its demographics and its politics. The people responded with a new demographic regime of lower birth rates (caused by later marriages) that, coupled with the mass emigration, caused the population to decline steadily. The political blame was a factor for many decades - even into the 20th century. More immediately, the famine led to demands for land reform - that is, the government buying out the landlords and selling to the peasants. 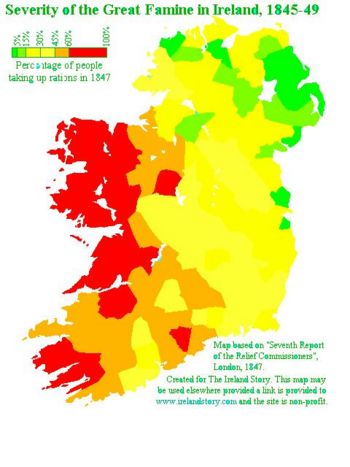 Ireland's population soared from three million in the 1770s to 8.2 million in 1840. There was little increase in technology, efficiency or arable land in use. Instead the growth was accommodated by land divided into smaller and smaller subplots, and concentration on potatoes as the primary food supply. About half of the population relied on subsistence farming, based mainly on the potato crop. Short harvests in different regions had caused famines before; this was the first to hit the entire island.[1].

The potato was ideal for the often damp and poor quality soil of the west of Ireland. It was considered to be the 'lazy crop' - one only needed to plant it and allow it to grow with some gentle weeding needed from time to time. Tenant farmers usually spent the rest of their time with a small number of farm animals such as pigs, chickens, geese and sometimes a few head of cattle (although the richer farmers dominated the cattle market). The squalor that many Irish farmers lived in was contrasted starkly with the luxury of some of the landlords in their manor houses. The resentment thus caused resulted in widespread looting and murders during the famine years and after.

The potato blight was a disease that affected potatoes in an almost encroaching manner (potatoes appeared normal immediately after they were dug up - the blight affected them in that they would deteriorate hours after they had been harvested). It hit the Irish subsistence farmer terribly. Although the disease first appeared in the south of England, it later spread to Ireland and had a much more disastrous effect there as there was little diversity in terms of subsistence crops grown throughout the Irish countryside.

Mortality due to the famine was highest in the province of Connaught, including the counties of Sligo, Galway, and worst of all, County Mayo.

Differences of opinion on the nature and severity of the potato crop dominated debates in London, as Prime Minister Robert Peel looked to repeal the Corn Laws, which prevented food imports. The disaster in Ireland persuaded him to act at once. The Irish Famine quickly became a political fiasco in the House of Commons - members of Peel's own Whig Party, who were avid protectionists, seized on every favourable report concerning the Irish famine and denounced the rest as exaggerations. Westminster's growing impotence in relation to dealing with the problem in their western province was slowly mobilising an anti-English attitude in the Irish countryside - paving the way for the 1848 Young Ireland rebellion and creating a whole new breed of Irish political activist - the Fenian.

Peel did not let party interests stem his desire to prevent widespread death as a result of the famine. In early November 1845, he organised the purchase of one hundred thousand pounds worth of Indian corn in the United States to be shipped to Ireland in order to supplement the rapidly decreasing food supply. He did not wish to hand out this food for free, but believed that by selling it cheaply he could cut out extortionate prices charged due to the lack of food in the country and prevent opportunistic profiteering. He placed his main reliance, however, on private charity of the local gentry and professional classes and a Relief Commission set up to establish local committees, which would raise funds and distribute food.

At the same time a board of works would embark on a massive new road construction programme to provide employment for the rural poor - this eventually culminated in the much despised 'famine walls' built up throughout the country, but particularly in the hills and mountains of the west of Ireland, where walls were built solely to provide work to peasants in return for food. More often than not these stone walls provided no economic or infrastructural benefit, but were built anyway.

Another aspect of the relief programme was the development of the Workhouses. Although not prevalent in the early part of the Famine, the Workhouses became notorious later on as the government lost its grip on controlling the famine and preventing starvation. The Workhouses contained whole families, many of which were split up and rarely met each other again during their stay in what some people regarded to be nothing more than sanatoriums. Disease was rampant due to poor hygiene and overcrowding, and a rigid discipline structure was implemented while thousands died in these landlord-promoted Workhouses throughout the country.

Nevertheless, during the first season of the famine, the government's measures were successful in that few died of starvation. As the famine progressed, these early successes would turn out to be nothing more than a brief respite from the appalling spread of disease and malnutrition throughout the country which was prevalent for the remaining famine years.

The blight struck again in August 1846; and this was when despair became absolute. The weather had been warm in the months preceding the harvest and hopes were high both in Ireland and in Westminster that the blight had run its course and that the potato would be saved. This was not so, and the former Prime Minister Peel - strongly in favour of direct help to the Irish people - had been ousted by the new Prime Minister Lord John Russell. The politics of the era was that of a Laissez Faire government policy - that is, that the government was not well placed and neither should it be well placed to offer disaster relief. Relief operations which were profitable to enterprising individuals were not interfered with by government forces and this hampered efforts to truly solve some of the problems in the Irish countryside. Drainage and reclamation of farmland were but two possible solutions to the crisis - solutions that the government had no intention of pursuing. Russel wrote in October 1846:

The Irish tenant farmer rarely handled money - he paid for his rent through his labour. He rarely used money in the purchase of food - being paid a money wage in public works programmes was useless unless supplemented by a retail food distribution system for him to pay money for his food which was sorely lacking in the Irish countryside.

The landlords as a whole could not cope with the starving peasants on their lands. Some evicted tenants. Typically the landlord as a class had large mortgages with heavy payments, were living beyond their incomes, and had no cash reserves that could be used to buy food. Their wealth was in the land. Their income depended on tenant farmer to work their lands and pay them with crops for resale. The landlords as a whole wanted the government to send famine relief, insisting that if Ireland was to be considered an integral part of the British Empire, it should be relieved by the Empire.

Religious organisations stepped in with large scale charity work. Protestant groups especially set up soup kitchens; the Quakers were particularly well regarded in this role, although Methodists and others were active as well. The Catholic Church has long been criticised for its relatively little aid, recounted in works of fiction and non-fiction addressing the age, as typified by John B. Keane's drama, "The Field," and the film "The Wind that Shakes the Barley." 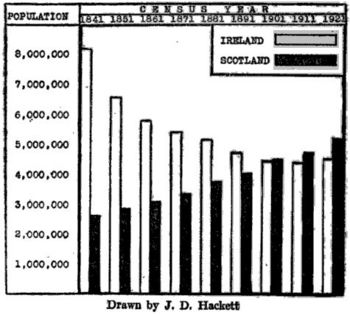 The Quakers did some extraordinary relief work, helping raise awareness in Britain about the plight of the Irish tenant farmer, and thus helping and persuading enlightened individuals throughout the Empire to raise funds and set up organisations to help the tenants. For many years after the famine, families which had accepted help from the Quakers were often called 'Soupers' and regarded as traitors to the Catholic faith.[3]

As a result of the famine, popularly called An Gorta Mór ("The Great Hunger") in Irish Gaelic, and the subsequent exodus to foreign shores, many Irish people began to harbour a resentment of the establishment and the English people. This was particularly true for many who settled in the United States, and was a feeling sometimes passed down from generation to generation. Memories of the disaster may have resulted, in part, in support for Irish republicanism in later decades, culminating in such organisations as the Irish Republican Brotherhood and NORAID.