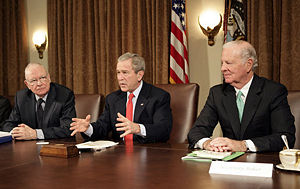 The Iraq Study Group (ISG), also known as the Baker-Hamilton Commission, was a bipartisan panel charged with assessing the situation in Iraq resulting from the 2003 invasion and subsequent occupation of that country by a coalition of countries led by the United States. It was appointed March 15, 2006 and published its report, which included 79 policy recommendations, on its website December 6, 2006. The ISG was led by Republican James Baker, a former Secretary of State, and Democrat Lee Hamilton, a former U.S. Representative.

Members of the Iraq Study Group

In addition to the two chairs, the ISG was made up of eight members from public service, four from the Republican Party and four from the Democratic Party. The members were:

Republican Rudy Giuliani resigned as a member on May 24, 2006. He was replaced by Edwin Meese. Independent Robert Gates resigned November 8, 2006, after being nominated by President George W. Bush to replace Donald Rumsfeld as Secretary of Defense. He was replaced by Lawrence Eagleburger.

The ISG Report appeared at a time when the situation in Iraq was, according to the opening sentence in the Executive Summary, “grave and deteriorating.” [1] The report noted that the US faced a complex set of challenges in Iraq and that if the situation continued to deteriorate at the rate it had been in 2006, consequences for the country itself, the Middle East, and the United States could be catastrophic. As the main reason why current US policy was not working in Iraq, the panel cited the lack of national reconciliation among Iraqis [2]. The panel provided in total 79 recommendations which they believed would strengthen Iraq, the Middle East, and the United States of America [3]

In assessing the situation prevailing in Iraq in 2006, the Baker-Hamilton commission included the following aspects:

The ISG recommended that the United States launch a diplomatic “offensive” in the Middle East to elicit help from Iraq's neighbors in quelling the rising violence in Iraq. In particular, the report proposed the Bush administration engage both Iran and Syria in direct negotiations, using both incentives and disincentives [9]. The report also stated that “the United States will not be able to achieve its goals in the Middle East unless the United States deals directly with the Arab-Israeli conflict” [10]. Finally, the commission noted that Afghanistan should not be forgotten and recommended that the US government provide additional political, economic, and military support, including shifting military troops from Iraq to Afghanistan [11].

The general tenor of the ISG Report with regard to the internal situation in Iraq was that the US government should force the government of Prime Minister Nouri al-Maliki to take more responsibility. In particular, the report addressed the following nine areas:

Responses to the ISG report

President George W. Bush attempted to communicate an open-minded approach when the ISG report was presented to him on December 7, 2006, saying, “This report will give us all an opportunity to find common ground.” [12] However, it was well known that the president did not agree with the report's proposals. A week before the ISG report was made public, portions of it were leaked to the press. On November 30, Bush said at a press conference in Jordan that “this business about graceful exit just simply has no realism to it whatsoever.”[13] After receiving the report, President Bush expressed resistance to several key recommendations and said that he would not act until he received reports from the Defense and State Departments.[14]

US Secretary of State Condaleeza Rice also rejected a key recommendation of the report, that the Bush administration engage in direct negotiations with Syria and Iran. She commented that the price for talking to the two regimes would likely be too high, referring to Syria's known meddling in Lebanese internal affairs and Iran's widely suspected pursuit of nuclear weapons.[15]

On the whole, conservative politicians rejected the ISG Report when it was made public. Outgoing House Majority Leader John Boehner (R-Ohio) rejected the recommendations for troop withdrawal and negotiations with Syria and Iran. [16] Sen. John McCain (R-Arizona) criticized the report for rejecting his idea of increasing troop levels, saying this contradicted expert advice given by many uniformed officers.[17] Moderate Republicans, including Sen. Chuck Hagel (R-Nebraska), Susan Collins (R-Maine), and Olympia Snowe (R-Maine) were more positive about the report, the latter saying she hoped the report would lead to a withdrawal from Iraq.[18]

Many Democrats agreed with the general conclusions of the report. Sen. Harry Reid (D-Nevada), the incoming Senate Majority Leader, urged the president to implement the recommendations of the ISG. The newly-elected House Speaker Rep. Nancy Pelosi (D-San Francisco) said that the report's recommendations closely echoed Democratic proposals made earlier in 2006 but which the president had ignored. “I hope the initiative today will move the president to be bipartisan,” Pelosi said. Rep. Tom Lantos (D-San Mateo) hoped that the report would finally convince the administration to talk directly to Iran and Syria.[19] However, Rep. John Murtha (D-Pennsylvania) said that the report did not represent a radical enough break with Bush policy on Iraq and did not push for a rapid enough troop withdrawal.[20]

Opinions in mainstream media were generally in favor of the report's conclusions. The editors of the New York Times welcomed the report and described it as a "deeply diplomatic document" that was written to provide political cover for President George W. Bush amidst the "quagmire" of Iraq where defeat was inevitable.[21] Newsweek editor Fareed Zakaria wrote that the report proved the failure of the administration's policy to establish a democratic state in Iraq and that the only way to move forward in the attempt to promote freedom in the Middle East would be to abandon the attempt in Iraq.[22] Newsweek also reported results from a poll that showed that twice as many Americans supported the report's recommendations as those who disagreed with it.[23] Dan Froomkin wrote in the Washington Post that President Bush's rejection of the ISG Report was worrying; Froomkin sharply condemned the counter-proposal of the “surge.”[24]

But the editors of that newspaper, though generally in agreement with the thrust of the report, voiced concerns that the report went over too much old ground without providing any "evaluation of what should be done if the new strategy doesn't work." They argued that debate should continue.[25] Ralph Peters, a retired Army officer and member of USA TODAY's board of contributors, rejected the report as naive. In particular, he criticized the worldview presented in it as one that hearkens back to the Cold War era, calling ISG co-chairman James Baker short-sighted.[26]

Most liberal and progressive media enthusiastically endorsed the ISG report's findings. Highly critical of the Bush administration's Iraq policy, Daniel Levy of the liberal magazine The American Prospect urged Democrats to ensure the ISG Report did not suffer “crib death.” [27] Yet in the web version of the same magazine, Spencer Ackerman rejected the report as vague and the committee as lacking in real expertise, deriding the report's efforts to seek consensus where instead decisive about-face was needed.[28] Robert Dreyfuss offered a pessimistic commentary in the liberal magazine The Nation. He agreed with the report's assessment of the administration's Iraq policy as a “complete failure” and that withdrawal was the only way forward. Yet he chided the panel for proposing that the US government can in any way cooperate with the Iraqi government which, he believed, “doesn't exist,” and an Iraqi army “that is not a national army” but is full of sectarian divisions. Rather than waste time on trying to turn Iraq around, the Bush administration ought to have simply admitted that the War in Iraq was already lost and withdrawn immediately and completely from Iraq.[29]

Criticism from conservative media came among others from William Kristol, editor of the conservative weekly Weekly Standard, who called the report a “disguised surrender.” [30] The main criticism against the report was that the commission's understanding of the military and diplomatic realities of Iraq and the Middle East was shallow and naive. The Weekly Standard commented that the main recommendation of the ISG report—to gradually withdraw from Iraq and transfer authority to the Iraqis—was already White House policy but that the commission did not offer any solutions to the underlying problems that had repeatedly impeded efforts to implement it. The recommendations represented a consensus among the 10-member panel. “But this was presumably not the primary goal of this exercise.” [31] The conservative magazine National Review similarly opined that the report's recommendation to negotiate with Syria and Iran was unrealistic, calling it “less realpolitik than childishness.” [32] Instead, both magazines, in articles written by authors (including Frederick Kagan, Robert Kagan and Reuel Marc Gerecht, all associated with the American Enterprise Institute), promoted a strategy essentially identical to what later became known as “the surge,” that is, of increasing troop levels dramatically to control the security situation.

The report was overwhelmingly rejected in Iraq. Shiites believed the report was biased in favor or the country's Sunni minority. The influential Shiite leader Abdul Aziz al-Hakim remarked the report was full of “inaccurate information based on dishonest sources.” Ayad al-Smmarai, a Sunni politician, commented that the report was designed "to solve American problems, and not to solve Iraq's problems."[33] Kurds also did not like the report because they feared its recommendations threatened the relative autonomy of the Kurdish region in Iraq. Massoud Barzani, President of the Iraqi Kurdistan region,said he did not want the central government to meddle in Kurdish regional affairs. He was angry that the panel never visited Kurdistan and said that the Kurds were “not abiding by this report.” The president of Iraq, a Kurd, also rejected the report.[34]

America’s two main allies gave the report a somewhat chilly reception. British Prime Minister Tony Blair approved of the commission’s recommendation to link the Iraq War to the Israeli-Palestinian conflict. However, while Blair had already agreed to the withdrawal of British troops in Iraq, he did not approve of the proposal to threaten the support for Iraq’s government in order to enforce progress, or of setting a definite date for withdrawal of US troops. [35] Australian Prime Minister John Howard similarly approved of the general conclusions of the report while rejecting many specific recommendations, in particular setting a date for withdrawing Australian troops.[36]

European politicians overall welcomed the report, noting that it represented a much-needed correction of America's Iraq policy they believed had failed. Both the French and German Foreign Ministers expressed hopes that the American government would change course. French newspapers took the report as a belated admission of defeat in Iraq and a “stinging statement of failure” of the Bush administration's Iraq policy. The newspaper Le Monde noted that it was a “lesson in diplomacy for Bush.” However, some European intellectuals said that the report was no longer realistic at the time it was published, commenting that negotiations with Syria and Iran seemed impossible. [37]

The Israeli government rejected the ISG Report. Prime Minister Ehud Olmert criticized the report's finding that key to solving the problems in Iraq was to address the Israel-Palestine Conflict.[38]

In the Middle East, the report was widely welcomed. Both the Palestinian Authority and the Islamic fundamentalist movement Hamas, labeled a terrorist organization by the US government, indicated agreement with the report's conclusion that solving the Palestinian-Israeli conflict was essential to turning Iraq around.[39]