The International Military Tribunal (IMT) in Nuremberg, more commonly known as the Nuremberg Tribunal, was established by the four major Allied powers in Europe, convened as the Allied Control Commission. Its function was to try the Major War Criminals (i.e., the term used in the indictment) of Nazi Germany, as well as determining whether certain Nazi organizations were to be considered as criminal conspiracies of which membership was a crime. It complemented the International Military Tribunal (Tokyo) of the Major War Criminals of the Empire of Japan, and was followed by a series of Nuremberg Military Tribunals conducted by the United States.

One argument for the trials' legitimacy stated:

"It has been argued that the Tribunal cannot be regarded as a court in the true sense because, as its members represent the victorious Allied Nations, they must lack that impartiality which is an essential in all judicial procedure. ... As no man can be a judge in his own case, so no allied tribunal can be a judge in a case in which members of the enemy government or forces are on trial. Attractive as this argument may sound in theory, it ignores the fact that it runs counter to the administration of law in every country. If it were true then no spy could be given a legal trial, because his case is always heard by judges representing the enemy country. Yet no one has ever argued that in such cases it was necessary to call on neutral judges. The prisoner has the right to demand that his judges shall be fair, but not that they shall be neutral. As Lord Writ has pointed out, the same principle is applicable to ordinary criminal law because 'a burglar cannot complain that he is being tried by a jury of honest citizens." [2]

While the Allies had, for some time, been discussing how to handle the leaders of the Third Reich, the formal IMT opened in Berlin on October 18, 1945. Proceedings began in Nuremberg on November 14, 1945, and ended with the sentences on October 1, 1946.

Convicted defendants condemned to death were subsequently executed, at Nuremberg, on October 16, 1946.[3] Those defendants subject to imprisonment were held at Spandau Prison in Berlin, which closed after the last prisoner, Rudolf Hess, died on August 17, 1987.

While the original idea was to have multiple trials, this broke down in four-power argument. Only the "Trial of the Major War Criminals" was conducted under the IMT. Subsequent war crimes trials were under the authority of individual major allied tribunals, such the U.S. Nuremberg Military Tribunals, or trials by occupied powers such as Poland. 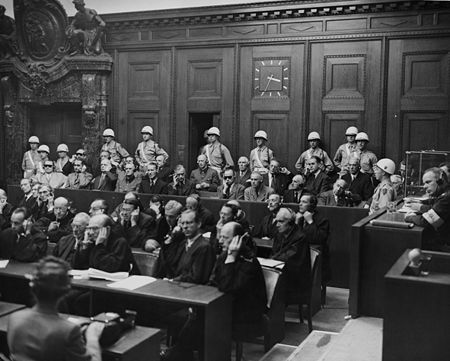 Both individuals and organizations were on trial.

Not all the major war criminals were available to the Tribunal. Adolf Hitler, Heinrich Himmler and Joseph Goebbels, for example, had committed suicide. Reinhard Heydrich had been assassinated. Martin Bormann could not be found and was tried in absentia; more recent information indicates he had died before the end of the war.

Robert Ley was indicted but committed suicide before the trial began. Gustav Krupp was indicted but was never tried because of severe illness; the Tribunal rejected the prosecution's attempt to substitute his son, Alfried, as a defendant after the father had been found incompetent.

An opening session of the IMT was held at Berlin on 18 October 1945; the trial convened at Nuremberg on 14 November 1945 and concluded its business with the passing of sentence on nineteen of the twenty-two defendants on trial on 1 October 1946. The defendants were: