The Imagine Piano Peace Project was a peaceful demonstration against violence in which a piano associated with nonviolence was exhibited at various U.S. sites of infamous violence.

The piano, a Steinway upright, was purchased new by John Lennon in December 1970 and delivered to the recording studio in his home in Berkshire, England. There, in 1971, he composed and recorded the song Imagine on it and was filmed playing that song to his wife Yoko Ono on it. A private collector bought the "Imagine piano" in 1992 and allowed the Beatles' Story museum in Liverpool, England, to exhibit it from February to October of 2000, when it was sold by the auction house Fleetwood Owen, a business partnership of musician Mick Fleetwood and auctioneer Ted Owen that sold other Beatles memorabilia in the same auction. 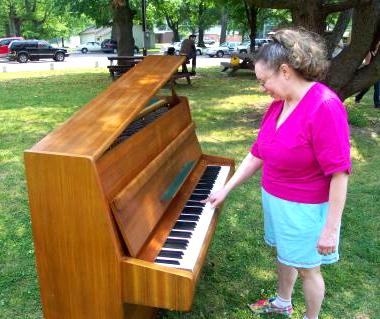 Imagine piano at Crittenden County AR courthouse on May 24, 2007.

In that 2000 auction, British pop singer George Michael and his American domestic partner Kenny Goss bought the piano for £1.45 million (plus the auction house's 15% commission). They allowed the piano to be exhibited at a peace protest on November 22, 2006, at the "Grassy Knoll" in Dallas, Texas, U.S., where President John F. Kennedy was assassinated on November 22, 1963, and from April through May of 2007 the piano was on a "tour" of U.S. places where significant acts of violence had taken place: At each site, someone played (and sometimes sang) the song Imagine, and the owners' employees videotaped and photographed the event for future publications to benefit charity. Pictures were also posted to the tour's official webpage, showing where the piano had been and when.

In late May 2007, Michael and Goss donated the "Imagine piano" to the victims of the shootings on the campus of Virginia Tech on April 16, 2007, and the piano was delivered to that school. In early August 2007, the piano went on display at NorthPark Center, a shopping mall in Dallas, Texas, to remain on exhibit for four months.