From Citizendium
(Redirected from IS/LM)
Jump to: navigation, search

The IS-LM model is used in the teaching of macroeconomics to depict the interaction of the factors determining the level of demand in an economy.

The IS-LM model conceptualises the economy as consisting of two markets in one of which occurs all of the purchases of goods and services that happen throughout the country and in the other of which occurs all of the purchases of financial assets. It shows how a country's national income may be jointly determined by the way people behave in the market for goods and services and the way they behave in the market for financial assets. In the market for goods, investment is taken to be the active element, with consumption being determined passively as what remains of national income after deducting what is assumed to be the more-or-less fixed proportion that goes into saving. The financial assets market is taken to be made up on the one hand of money, which is non-interest-bearing, and on the other of all of those assets (such as stocks, bonds and savings certificates) which, in one way or another, can be considered to be interest-bearing. The cost of holding money rather than interest-bearing assets is taken to be the interest payments that are thereby foregone, but people are taken to wish to hold a certain amount of money for day-to-day transactions. 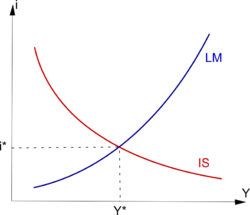 In its graphical form the model is shown as a pair of intersecting curves relating the level of national income (on the horizontal axis) to the rate of interest (on the vertical axis).

The shape of the I-S curve follows from the fact that a rise in interest rates tends to encourage saving and discourage investment, combined with the assumption that the amount that people save rises and falls with income in an unchanging relationship (termed the "propensity to save"). Then for saving to be kept in line with investment, a rise in the interest rate must be accompanied by fall in income so that the resulting fall in investment is accompanied by the balancing fall in saving. Conversely, a fall in the interest rate would be associated with an increase in income. So the I-S curve has to fall from left to right.

The shape of the L-M curve reflects two assumptions, one being the assumption that the quantity of money that the public wishes to hold in order to have it available for speculation falls as the interest rate rises, and the other being the assumption that the amount of money that is tied up in day-to-day transactions rises with a rise in national income. It follows from those assumptions that, at a given level of the total money supply, the process of reconciling the transactions demand with the speculative demand implies a positive association between national income and the rate of interest. So the L-M curve has to rise from left to right.

The way in which the model explains the tendency for the economy to settle down to an equilibrium following a shock or a sudden change in behaviour, can be examined in words by supposing that there is a reduction in the public's propensity to save, meaning that people spend more of their money on "consumption goods". That would prompt an increase in the supply of those goods, in the total income of those employed in their production, and thus an increase in national income. However, that increase in expenditure and income would mean that more of the available money would be used as "transactions balances" reducing the amount available for people to hold as cash reserves for speculative purposes. That would make people willing to pay more in interest to restore their speculative reserves and the resulting rise in interest rates would stimulate saving and discourage investment and so check the growth in income. The implied assumption is that those adjustments take place instantaneously and without regard for expected developments.

The model is widely used in the teaching of economics to discuss the relative effectiveness of fiscal policy and monetary policy as means of stabilising the economy.

The effect of using fiscal policy in the form of an increase in public expenditure, as represented as the effect of a shift to the right of the I-S curve, is to produce an additional rise of national income, the magnitude of which depends upon the slope of the L-M curve at the point of intersection - the steeper it is, the smaller will be the additional increase in national income. The steepness of the L-M curve depends, in turn on two factors:

The higher is the interest elasticity, the flatter will be the L-M curve.

The history of the model

The model was first put forward in a 1937 lecture by Sir John Hicks, who presented it then as a way of illustrating the relationship between the Keynesian theory of macroeconomics and the previously orthodox "classical theory" [1].

An important extension of the IS-LM model was built by Robert Mundell (1963) and Marcus Fleming (1962) in the 1960's. The Mundell-Fleming model describes a small open economy with one more curve representing equilibriums of international exchanges.

The limitations of the model

During the 1950’s and 1960’s microeconomic investigations on consumption and investment gave a better understanding of the IS slope. Milton Friedman developed the idea that the consumption level of household’s was mainly determined by a long-term expectation a theory known as the permanent income hypothesis[2]. Franco Modigliani life-cycle theory demonstrated that consumption was also related to age. Those two theories denied short-term policies to have an important effect on consumption, and thus the effects of the spending multiplier.

Such criticisms of Keynesian ideas were not always criticisms of the IS/LM model. In fact, economists like Milton Friedman used the IS/LM framework to confute Keynesian economics[3]. Yet Friedman rejected the paradigm of "general equilibrium" he viewed as characterized by "abstractness, generality, and mathematical elegance"[4]

The most severe criticisms of the IS/LM model came from the fact that it neglects private agents' expectations. Modern macroeconomic models which take expectations into accounts can provide results opposite to those of IS/LM. In fact, the model considers that short run is independent from long run. Yet expectations about the future have for example a direct impact on current wages which stimulates inflation and thus cancelled the positive effects of many macroeconomic policies described by the IS/LM model. In such cases, inflation remains the only effect and disturbs the coordination of private agents. The consequence of the rational expectations theory is that central banks of several industrial countries (the Federal Reserve and the European Central Bank for example) have been given independency and inflation control as their main objective.

Not withstanding its limitations as a policy instrument, the model remains the most common macroeconomic model taught to undergraduate students because of its pedagogical qualities.