Equilibriums in the real market : IS curve

“LM” refers to “Liquidity preference and money supply”. The LM curve represents all equilibriums where demand equals supply on the monetary market.

According to Keynes, people hold liquidities for two reasons.

So, according to Keynes, demand for money includes transactions demand (L1) and speculative demand (L2). In equilibrium we have the following relationship.

then LM is a increasing curve.

The general equilibrium is given by the intersection of IS and LM. The level of income and the interest rate can diverge from their equilibrium level only on a temporary basis. Indeed, 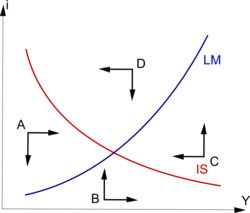 According to Keynes, the labour market is not a market among others. The demand of labour (that is to say the demand of corporations for workers) is not always determined by the level of wages, but also by the aggregate demand (C+I=Y). During a recession, the aggregate demand may be insufficient to require all production factors (capital and labour). In this case, the economy can be in equilibrium with persisting unemployment. In such a situation, the State can stimulate the economy with macroeconomic policies without creating inflationary tensions.

It can be noted that Keynes suggests implementing such measures in case of recession, while keynesian economists have then defended those policies as permanent regulation.

Slope of the curves 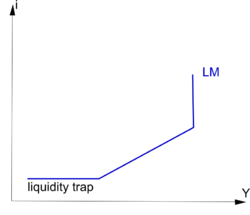 The efficiency of macroeconomic policies is directly affected by the slope of LM and IS. For example, a liquidity trap, which implies a flat LM curve, makes the monetary policy inefficient.

The liquidity trap occurs when interest rates would be so low that everyone would expect them to rise. In this case, an infinite speculative demand would actually make them reach a more realistic level. Keynes concludes that interest rates cannot fall under a certain level whatever the income Y. In this situation, LM is horizontal.

On the contrary, there is a level of interest rate for which speculators have lent all their money. There is no more saving to finance any expansion of the output. In this case, LM is vertical.

In John Hicks views, the vertical part of LM corresponds to the general equilibrium of classical economics, while the horizontal part was purely keynesian. In fact, the IS-LM model was an extent of the Walrasian theory which had forgotten some particular cases described by Keynes.

Between those extremes, expansions of the output are possible, but they increase the transactions demand for money and make interest rates rise.

If C is considered as a proportion of Y noted c, we obtain:

The last equation implies that if the government increases its spending (G) without increasing tax revenues (T), by creating a deficit, then the effect on the national output will be 1/(1-c) times greater. For example, if c=0,8, then an increase of 1 of G implies an increase of 1/(1-0,8)=5 of Y. This mechanism is known as the spending multiplier.

In a few words, the government can change the level of Y by reducing or expanding the budget deficit. 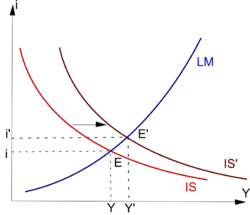 In the case of a expansionary fiscal policy, the government increases its purchases or reduces taxes, which creates a budget deficit and makes Y rise as explained before. This deficit shifts the IS curve to the right (Y rises). It results in a new general equilibrium (E'). The output Y has become Y' while the interest rate has risen from i to i'. By the way of higher interest rates, such a policy is said to crowd-out private investment. According to keynesian economics, this negative effect can be exceeded by the positive effect of the spending multiplier at the following conditions :

A contractionary fiscal policy would have the opposite effects. 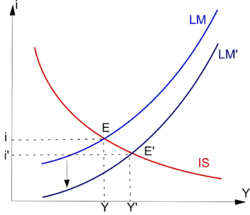 On the graph, an expansionary monetary policy makes LM shifts down (drop of the interest rate). Such a measure is particularly efficient under the following conditions:

A contractionary monetary policy would have the opposite effects.