of genus greater than 1, which admits a double cover

. These curves are among the simplest algebraic curves: they are all birationally equivalent to curves of the form

in the affine plane, where

is a polynomial in

, and the degree of

If a double cover

exists, then it is the unique double cover

, and it is called the "hyperelliptic double cover". The involution induced on the curve

By the Riemann-Hurwitz formula the hyperelliptic double cover has exactly

. Hence these points are all Weierstrass points. Moreover, we see that for each of these points

, and thus the Weierstrass weight of each of these points is at least

. However, by the second part of the Weierstrass gap theorem, the total weight of Weierstrass points is

, and thus the Weierstrass points of

are exactly the branch points of the hyperelliptic double cover.

, there is a unique double cover of

whose branch divisor is the set

. From an algebro-geometric point of view one can construct the curve

of the sheaf whose sections

over an open subset 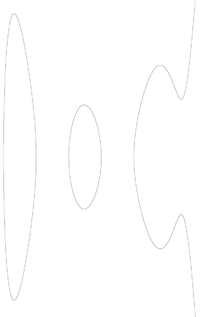 A plane model for a hyperelliptic curve of genus 3. Two Weierstrass points have non-real coordinates, and one is at infinity.

then C is birational to the plane curve

, where if one of the branch points is infinity, we omit the corresponding term in the product. The closure of this curve in the projective plane has a singularity on the line

If the genus of

is 2, then the degree of the canonical class

. Hence the canonical map is a double cover. The Jacobian variety of such a curve is an Abelian surface.

is a rational point on a hyperelliptic curve, then for all

. Hence we must have

. However, by Riemann-Roch this implies that the divisor

is rationally equivalent to the canonical class

. Hence the canonical class of

times the hyperelliptic class of

, and the canonical image of

is a rational curve of degree

is a set of at most

is a theta characteristic of

is in the Picard group of

. Moreover, it can be shown that

, and if there are two such sets

is the set of all Weierstrass points on

Every theta characteristics may be obtained in this way: Indeed if we count each set

. Hence our description exhausts all the theta characteristics. 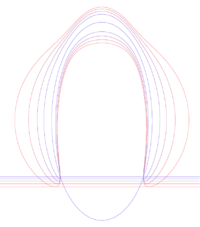 Since for any set

there is a unique double cover

, the coarse moduli space of hyperelliptic curves of genus

is isomorphic to the moduli of

, up to projective transformations. However, as there are more than three points in

, there is a finite non-empty subset of

that sends three of the points in

. Thus, the moduli of space which parametrizes

up to projective transformations, is a finite quotient of the space of distinct

. Specifically this space is an irreducible affine scheme of dimension

Compactifications of the moduli

There are two standard "natural" compactifications of the moduli of

. One is the binary forms compactification

: the GIT quotient of homogeneous polynomials of degree

in two variables by the group

of curves of genus