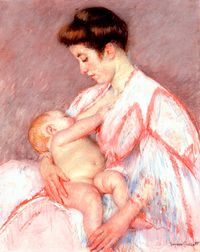 Human lactation, also known as breastfeeding, suckling, or nursing, occurs normally shortly after birth, as the mammary glands begin to form and secrete milk. The word 'lactation' also refers to the process itself of milk secretion by the mammary glands.[1] [2] Lactation occurs in all mammals.

Lactation is known as a two-stage process. The first stage in lactation is gland development and the secretion of specific milk components such as casein and lactose. Stage 2 is defined as “copious” milk secretion after the baby is born. Both stages are part of lactogenesis or milk production.

The mammary glands, located in the human breasts, first produce colostrum that is a fluid containing high amounts of immunoglobins and the protective protein lactoferrin.

Colostrum may also be expressed during the final weeks of pregnancy (24th week onward) in preparation for the milk production after childbirth. Stage 1 occurs during pregnancy when the glands becomes sufficiently differentiated to secrete small quantities of specific milk components such as casein and lactose. Stage 2 is when human milk is secreted and the letting-down of milk is brought about by a decreased production in progesterone which occurs after childbirth. Human milk usually is produced 36 hours after delivery and is complete five days after delivery.

Human milk contains carbohydrates (lactose); proteins (alpha-lactalbumin and whey); minerals, vitamins and fats. Human breast milk changes between fore and hind milk. The fore milk is lower in fat content while the hind milk has a higher fat content. Milk composition will also vary based on the mother’s diet and hormonal fluctuations.

Milk ejection or let-down is part of the breastfeeding process. A nursing mother often reports a “tingling” sensation as the breast milk is let-down and expressed through the nipples. Contractions in the uterus may also occur when the milk is let-down.The hormone oxytocin begins with the onset of suckling, or even prior to suckling; and is responsible for uterine contractions. Stress can affect oxytocin production thereby limiting milk production.

Milk production is regulated by how much milk the baby drinks during nursing. “....the actual volume of milk secreted may be adjusted to the requirement of the infant by feedback inhibitor of lactation...” As the breast empties more milk is produced to feed the baby.