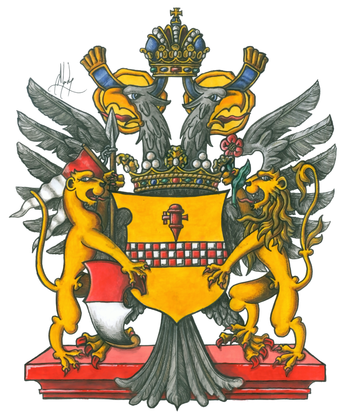 The coat of arms of the Marquises of Sesto, of Benafro and of the Balbases are, D’oro, alla fascia scaccata di tre file d’argento e di rosso sostenente una spina di botte di rosso, in palo.

The Spinolas were an influential family in Genoa well into the 15th century, first coming to prominence when Guido Spinola was elected Consul in 1102. Thereafter, with the continued support of the princely Doria family, the Spinolas were able to maintain important and leading roles in both the political and martial realms of Genoa.

The family held the titles of Duke of Sesto, Marquis of Sesto, of Benafro and of the Balbases and Grandee of Spain, and some thirteen family members were also appointed cardinals of the Holy Roman Catholic Church.