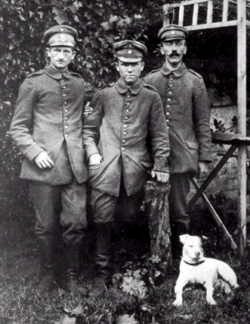 Adolf Hitler was an enlisted soldier in the World War I, performing well as an individual but showing no leadership ability. While he had formed antisemitic views in Vienna, his beliefs, which would lead to The Holocaust, intensified during the war. After convalescing from war injuries, he stayed in the Army as a political officer, and was assigned to report on groups including the German Workers' Party, the forerunner of the Nazis. See political beginnings of Hitler for the results of that assignment.

Still an Austrian, he petitioned and was accepted as a volunteer in the 16th Bavarian Reserve Infantry Regiment, also known as the List Regiment after its first colonel. Hitler wrote of the experience of receiving the response to his petition, "I opened the document with trembling hands; no words of mine can describe the satisfaction I felt...I sank down upon my knees and thanked Heaven out of the fullness of my heart."

Fellow soldiers, in the trenches, would recount how he would constantly complained of the "invisible foes", the Jews and Marxists. They generally regarded him as strange and distant, which would not help him in potential troop command. [1] His officers considered him thoroughly reliable in carrying out tasks as a combat messenger, but did not promote him because they did not feel he was capable of command.

Some of his comrades, however, would stay lifelong associates, such as Max Ammann, his sergeant and company clerk, who would become the early Nazi Party treasurer, and then take the lucrative position of publisher for the Party.

He was a brave if unconventional soldier, being decorated with the Iron Cross Second and First Class, the latter unusual for a junior enlisted man. It was recommended by his immediate superior, Lieutenant Hugo Gutmann, a Jew. Hitler only began to wear the Iron Cross in 1927, as he became active in politics. He did help Guttman emigrate in 1939 and issued him a pension that would last to the end of the war, but, in 1941, said of him

I did not wear the Iron Cross 1st class during the World War [1914-18] because I saw how it was awarded. We had a Jew in the regiment, Gutmann, an unparallelled cowardly person. He wore the Iron Cross 1st Class. It was revolting and a disgrace. [2]

At the front, his personal reading material consisted of an architectural guides to Berlin, by a Jewish architectural critic, Max Osborn.[3]

In 1916 and 1917, recovering from combat wounds in Munich, he observed "I thought I could no longer recognize the city", and became furious about the "Hebrew corruptors of the people". [4]