Hitler and his youth 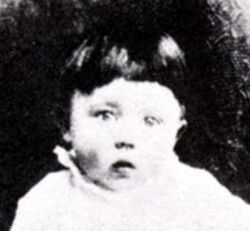 Hitler as a baby

As with any person, the childhood and adolescence of Adolf Hitler affected the adult he would become. There are also speculations about his ancestry, some clearly not true, and others suggesting things such as his having Jewish ancestry, rejection of which led to his intense antisemitism.

His father, Alois, was the illegitimate son of a servant girl, Marianne Schickelgruber in Graz. In 1876 Alois legally changed his name to Alois Hitler. Since this was before Adolf's birth, the claim that his name really was Adolf Schickelgruber cannot be true.

Hitler was born in Braunau, Austria-Hungary to a devout Catholic family of middle class status.

Alois was an official of the Imperial Austrian customs service, a prestigious white collar position. Alois was widowed twice, and died in 1903.

His third wife, Klara Poelzl Hitler — who was 23 years his junior — bore him six children, only two of whom reached maturity: Adolf, and his younger sister Paula, who died in 1960.

After the dealt of Alois, she moved to a more modest apartment, living on savings and pension. She tried to educate him in accordance with his father's intention, explained by Adolf as "to have me study for a civil servant's career."[1]

A mediocre student, he dropped out at age 16, as was normal for someone not headed to university.[2] This was facilitated by a long illness, which required him to drop out of school for a year. [1] While he called the years between 16 and 19 the happiest of his life, he both rejected a trade and wanted to become an artist, and was concerned with politics. His boyhood friend, August Kubizek, said "he saw everywhere only obstacles and hostility....He was always up against something and at odds with the world...I never saw him take anything lightly." While he rejected formal education, Kubizek said he was always surrounded by books, especially on German history and mythology. [3]

Georg Ritter von Schoenerer had been instrumental, in the 1870s, of introducing "raucous nationalism" to parliament. von Schoenerer's ideology was centered on antisemitism, and extended to anti-liberalism, anti-socialism, anti-Catholicism, and opposition to the Hapsburgs. Hitler had already absorbed ideas from him while at home in Linz, including the "Heil" greeting and the term "Fuehrer", applied to von Schoenerer. [4] von Schoenerer was also sexually puritanical, preaching celibacy until the age of 25, keeping the race pure by avoiding infection from prostitutes. [5]

The music of Richard Wagner influenced him at age 17, both in terms of heroic agendas and antisemitism. He later wrote that "whoever who wants to understand National Socialism must know Wagner."[6]