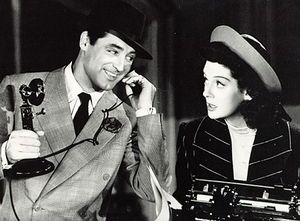 Cary Grant and Rosalind Russell in a scene from the film.

His Girl Friday is a 1940 screwball comedy directed by Howard Hawks, starring Cary Grant and Rosalind Russell. The film is a remake of sorts, drawing its source material from the 1931 film, The Front Page, itself an adaptation of The Front Page, a 1928 play by Ben Hecht and Charles MacArthur. Noted for its rapid-fire wit and fast paced dialogue, the film is ranked consistently on the Internet Movie Database's list of its top 250 films, was #19 on the American Film Institute's 100 Years, 100 Laughs list[1], and has been selected for preservation in the United States National Film Registry[2].

Cary Grant is hard-boiled newspaper editor Walter Burns, and Rosalind Russell is his ex-wife and former star reporter, Hildegaard "Hildy" Johnson. She wants to marry Bruce Baldwin (Ralph Bellamy) and settle down to a quiet life as a wife and mother in Albany, but Burns has other ideas. When convicted murderer Earl Williams (John Qualen) escapes from the bumbling sheriff (Gene Lockhart) on the eve of his execution, Burns entices Johnson to cover one last story, and then the fun begins.

Walter does everything he can to keep Hildy from leaving, including getting Bruce arrested for passing counterfeit money (which Walter gave him) and kidnapping Bruce's mother. When escapee Williams practically falls into Hildy's lap, the lure of a big scoop proves to be too much for her. Bruce finally realizes it's hopeless and leaves.

Afterwards, Walter offers to remarry her, even letting her pick Niagara Falls for their honeymoon (they didn't have one the first time because of newspaper business). But then the phone rings; it seems there's a newsworthy strike in Albany, which is on the way to Niagara Falls...