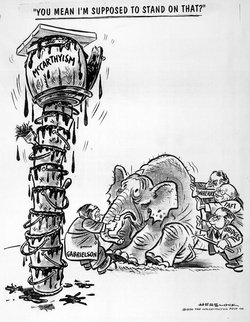 Herblock coined the term "McCarthyism" in this cartoon in the March 29, 1950 Washington Post

Herbert Lawrence Block, known as Herblock (October 13, 1909 – October 7, 2001), was a leading American editorial cartoonist for seventy years. Along with Bill Mauldin he was the most influential cartoonist of the postwar era.

Block's first cartoon appeared in the Dallas Daily News on April 24, 1929. It advocated for the conservation of America's forests. After syndication (1933–43) by the Newspaper Enterprise Association, in 1946 he joined the Washington Post, from which he never retired. Herblock's last cartoon was published on August 26, 2001. He won three Pulitzer Prizes (1942, 1954, 1979) and numerous other awards.

During the 1930s, Block moved left, and he became a staunch supporter of the New Deal and attacked the enemies of Franklin D. Roosevelt. He pointed out the dangers of Soviet aggression, the growing Nazi menace, and opposed American isolationists. He joined the Washington Post after serving in the military during World War II.

Corruption in Washington was always a main theme, as he attacked bureaucrats, the Pentagon, and inept administrators in the name of the common people. In 1950-64, Senator Joe McCarthy was a central target; Herblock coined the term "McCarthyism" in March 1950. Since 1948 Herblock vigorously attacked Richard Nixon, consistently featuring dark jowls. When he was inaugurated president in 1969 Herblock now drew a barbershop with a sign, "THIS SHOP GIVES EVERY NEW PRESIDENT OF THE UNITED STATES A FREE SHAVE." The honeymoon was brief and the heavy jowls soon returned as Herblock vigorously attacked the political abuses and scandals of the Nixon Administration. He was a strong supporter of civil rights and advocate of gun control. Although he supported the Cold War, he warned repeatedly THE BOMB could overcome human reason and go out of control.

Herblock's artistic sensibility owed a great deal to the Socialist Realism of the 1930s, and his cartoons were meant not to be humorous but to shape people's thinking and values. A champion of the common man, he ridiculed big business, lobbyists, the generals and admirals at the Pentagon, and every politician who threatened the republican values of the American people. Critic Joseph Sobran (1984) concluded:

His draftsmanship is mediocre and unimaginative: Stiff characters stand and talk, looking bland, surprised, or villainous. Not much happens; this isn't really visual art. The pictures are there to hang words on, and Herblock overuses the privilege of labeling objects in the picture. A Trojan Horse with the head of Ronald Reagan is labeled SUPPLY-SIDE ECONOMICS, with warriors labeled MILITARY-WASTE, WELFARE FOR THE WEALTHY, HOOVER-REAGAN POLICIES, and TRICKLE-DOWN THEORY leaping out of its side. One of the warriors is seizing David Stockman (STOCKMAN) by the shirt.