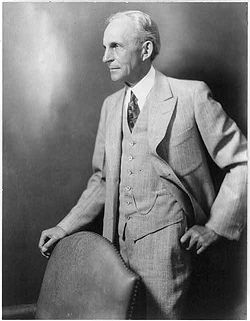 Henry Ford (July 30, 1863 – April 7, 1947) was a US automobile engineer and businessman who founded the Ford Motor Company and introduced modern mass production using the moving assembly line. Having experimented with gasoline-powered automobiles for a dozen years, he came to understand the need for a widely affordable and rugged automobile to suit the US market. The 1908 Model T Ford fit this need, and sales escalated. To facilitate more efficient production, managers at Ford Motor Company innovated the moving assembly line method of mass production and paid high wages to workers, which became known as "Fordism." An antagonist of big finance and monopolies, Ford earned the respect of common folk throughout the US, who flocked to buy his cars. His hatred of corporate control and high finance led him to turn the Ford Motor Company into a sole proprietorship, an anomaly in the era of modern large-scale business enterprise. He also made Ford Motor Company a vertically integrated company.

Throughout his life, Ford was active in many side affairs such as international peace, historic preservation, tractor and aircraft manufacture, politics, chemical research, race relations, housing construction, railroads, shipping, and publishing. He was vehemently opposed to outside interference in his business affairs whether it came from bondholders, minority stockholders, labor unions, or the US government. As such he violently opposed the organization of the United Auto Workers and refused to participate in New Deal economic recovery programs such as the National Recovery Administration.

In later life, Ford suffered at least two strokes and was incapacitated from about 1941. His son, Edsel B. Ford nominally headed the company as president from 1918 until his death in 1943, but was routinely undermined by his father as CEO. Ford passed management of the company to his grandson Henry Ford II in 1945. He died in 1947 leaving nearly all of his wealth to the Ford Foundation.

Henry Ford was born on July 30, 1863, in Dearborn, Michigan, the oldest of five children. His parents were William Ford and Mary Litogot. William Ford was an immigrant from County Cork, Ireland, and Mary Litogot was a first generation American of Belgian immigrant parents. Ford attended school in a one-room school house and often sat next to Edsel Ruddiman (for whom Ford would later name his only son). Ford was educated in rote memorization from McGuffy Readers which was a standard pedagogy of the day.

During the summer of 1873, Henry saw his first self-propelled road machine, a Nichols, Shepard & Co., stationary steam engine that could be used for threshing or to power a saw mill. The operator, Fred Reden, had mounted it on wheels connected with a drive chain. Henry was fascinated with the machine and Reden over the next year taught Henry how to fire and operate the engine. Ford later said, it was this experience "that showed me that I was by instinct an engineer."[1]

Henry took this passion about mechanics into his home. His father had given him a pocket watch in his early teens and he began tinkering with it. By fifteen, he had a reputation as a watch repairman, having dismantled and reassembled timepieces of friends and neighbors dozens of times.[2]

His mother died in 1876, which devastated Henry. His father expected Henry to eventually take over the family farm, but Henry despised farm work. With his mother dead, little remained to keep him on the farm. He later said, "I never had any particular love for the farm. It was the mother on the farm I loved."[3]

Following this inclination to avoid farm work and pursue mechanics, Ford left the farm in 1879. He was apprenticed as a machinist it the Michigan Car Company one of Detroit's largest machine shops. In 1882, he returned to work his father's farm in Dearborn. During this time he purchased and operated a portable Westinghouse steam engine. The Westinghouse Company hired him as a local mechanic.