Cerebral hemispheric lateralization alludes to the localization of brain function on either the right or left sides of the brain.

Incidentally, this lateralization is not confined to only the cerebral cortices, but also to the subcortical structures. A recent paper [1] indicates that mood state may be differentiated by lateralization of brain activation in fronto-limbic regions. The interpretation of fMRI (functional magnetic resonance imaging) studies in bipolar disorder is limited by the choice of regions of interest, medication effects, comorbidity, and task performance. These studies suggest that there is a complex alteration in regions important for neural networks underlying cognition and emotional processing in bipolar disorder. However, measuring changes in specific brain regions does not identify how these neural networks are affected. New techniques for analyzing fMRI data are needed in order to resolve some of these issues and identify how changes in neural networks relate to cognitive and emotional processing in bipolar disorder. 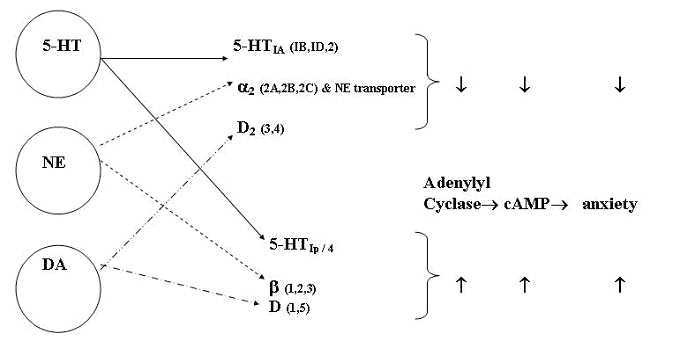 . It may be noted that 5-HT2 class receptors couple to Gq/G11 and do not primarily signal through cAMP pathways. Similarly, 5-HT3 receptors are ligand-coupled ion channels and do not primarily signal through cAMP as Figure 1 might seem to suggest. However, this only proves the existence of additional intracellular pathways such as the Gq/G11 coupled intracellular calcium/protein kinase C pathway, and also highlights the fact that signaling is much more complex than this model allows. Our oversimplification is essential for trying to grasp the overall complexity of all possible (known and as yet unknown) underlying mechanisms of the brain. The basic purpose of this figure is to show that (irrespective of the mechanisms of action) any neurotransmitter is capable of exerting opposing effects (e.g., increasing anxiety or ‘anxiogenesis’ and decreasing anxiety or ‘anxiolysis’) by acting through its diverse receptor subtypes.

The hemispheres differ in the types of cells (neurons as well as glia), as also the neurotransmitter receptor subtypes' distribution and the functional architecture.

Common perceptions are that the higher brain function (eg. logic, creativity) is lateralised, i.e, located in the right or left side of the brain. However, there is some division of mental processing. Researchers have been investigating to what extent areas of the brain are specialized for certain functions. If a specific region of the brain is injured or destroyed, their functions can sometimes be recovered by neighboring brain regions - even opposite hemispheres.

Unless someone has undergone a hemispherectomy (the removal of an entire cerebral hemisphere) there is no pure left-brained or right-brained people.

Interestingly, there is a greater right-sided EEG abnormality in depression owing to impaired cerebral lateralization. Therapeutically, too, better antidepressant results are obtained with non-dominant unilateral electroconvulsive shock. It is generally believed that “affect” processing is a right hemisphere (RH) function. It is also believed that RH dysfunction is characteristic of depressive illness. Both these beliefs are oversimplified because the relationship between affect processing and affective illness, in terms of intra- and inter-hemispheric role-play, is not straightforward. There is exchange of information and action between the two hemispheres (inter-hemispheric, i.e., between left and right; intra-hemispheric i.e., between anterior and posterior; and also cross-hemispheric coupling i.e., similarities between the left anterior and right posterior quadrants). Very broadly, a sad mood is a function of positive coupling (stimulation) between the left posterior and right anterior areas and/or negative coupling (depression) between the left anterior and right posterior areas of the brain [3].

Brain functions are lateralized to the right or the left sides and there are observed differences in the expression of neurotransmitter receptor subtypes. Some of these results are supported by a meta-analysis of various studies reported in the literature. Neuroanatomical asymmetries are known to be present in the human brain, and disturbed neurochemical asymmetries have also been reported in the brains of patients with schizophrenia [4]. Not only neuroanatomical but also neurochemical evidence supports the loss or reversal of normal asymmetry of the temporal lobe in schizophrenia, which might be due to a disruption of the neurodevelopmental processes involved in hemispheric lateralization.

Etevenon [5] proposed, more than two decades ago, a model for cross-coupling of diagonal quadrants of the brain in affect processing – but there was hardly any empirical data to support the proposal. With the advance of technology and its applications in the healthcare domain we are in a better position to construct a more realistic model.

Scientists [6] have demonstrated that mathematical modeling is a useful tool for diagnosing and assessing the prognosis of various neuropsychiatric disorders involving hemispheric lateralization.