Bone marrow transplantation was pioneered at the Fred Hutchinson Cancer Research Center from the 1950s through the 1970s by E. Donnall Thomas, whose work was later recognized with a Nobel Prize in Physiology and Medicine. Dr. Thomas' work showed that bone marrow cells infused intravenously could repopulate the bone marrow and produce new blood cells. His work also reduced the likelihood of developing a life-threatening complication called Graft-versus-host disease.

Since the early 1990s and the availability of the stem cell growth factors GM-CSF and G-CSF, most hematopoeitic stem cell transplantation procedures have been performed with stem cells collected from the peripheral blood. Collecting stem cells provides a bigger graft, and does not require that the donor be subjected to general anesthesia to collect the graft.

Hematopoeitic stem cell transplantation remains a risky procedure and has always been reserved for patients with life threatening diseases.

Most recipients of HSCTs are leukemia patients or others who would benefit from treatment with high doses of chemotherapy or total body irradiation. Other patients who receive bone marrow transplants include pediatric cases where the patient has an inborn defect such as severe combined immunodeficiency or congenital neutropenia and was born with defective stem cells. Children or adults with aplastic anemia have lost their stem cells after birth and may not require such high doses of chemotherapy and irradiation prior to a transplant. In this case there is a greater need for immunosuppressive agents. Other conditions that bone marrow transplants are considered for include thalassemia major, sickle-cell disease, myelodysplastic syndrome, lymphoma, Hodgkin's disease, and multiple myeloma. More recently non-myeloablative, or so-called "mini transplant," procedures have been developed which do not require such large doses of chemotherapy and radiation. This has allowed HSCT to be conducted in older patients and without the need for hospitalization.

There are two major types of stem cell transplantation maneuvers. Autologous HSCT involves isolation of HSC from a patient, storage of the stem cells in a freezer, high-dose chemotherapy to eradicate the malignant cell population at the cost of also eliminating the patient's bone marrow stem cells, then return of the patient's own stored stem cells to their body. Autologous transplants have the advantage of a lower risk of graft rejection, infection and graft-versus-host disease.

A major limitation of allogeneic bone marrow transplantation is a shortage of donors. To avoid rejection of the transplanted stem cells or severe graft-versus-host disease, the donor should have the same human leukocyte antigens (HLA) as the recipient. About 25 to 30 percent of potential HSCT recipients have an HLA-identical sibling. For other recipients, registries of volunteer unrelated donors can be quickly searched in order to find a potential HLA match. If an exact match cannot be found, a partially matched donor can be used. However, the use of mismatched donors may increase the risk of graft rejection or severe graft-versus-host disease.

A compatible donor is found by doing additional HLA-testing from the blood of potential donors. The HLA genes fall in two categories (Type I and Type II). In general, mismatches of the Type-I genes (i.e. HLA-A, HLA-B, or HLA-C) increase the risk of graft rejection. A mismatch of an HLA Type II gene (i.e. HLA-DR, or HLA-DQB1) increases the risk of graft-versus-host disease. In addition a genetic mismatch as small as a single DNA base pair is significant so perfect matches require knowledge of the exact DNA sequence of these genes for both donor and recipient. Leading transplant centers currently perform testing for all five of these HLA genes before declaring that a donor and recipient are HLA-identical.

"Race" and ethnicity are known to play a major role in donor recruitment drives, as members of the same ethnic group are more likely to have matching genes, including the genes for HLA. [1] 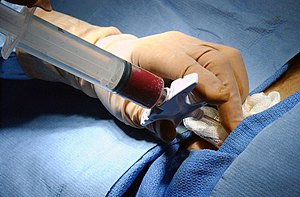 In the case of a bone marrow transplant, the HSC are removed from a large bone of the donor, typically the pelvis, through a large needle that reaches the center of the bone. The technique is referred to as a bone marrow harvest and is performed under general anesthesia because hundreds of insertions of the needle are required to obtain sufficient material.

Peripheral blood stem cells are now the most common source of stem cells for HSCT. They are collected from the blood through a process known as apheresis. The donor's blood is withdrawn through a sterile needle in one arm and passed through a machine that removes white blood cells. The red blood cells are returned to the donor. The peripheral stem cell yield is boosted with daily subcutaneous injections of Granulocyte-colony stimulating factor, which mobilizes stem cells from the donor's bone marrow into the peripheral circulation.

Unlike other organs, bone marrow cells can be frozen for prolonged time periods (cryopreserved) without damaging too many cells. This is necessary for autologous HSC because the cells must be harvested months in advance of the transplant treatment. In the case of allogeneic transplants fresh HSC are preferred in order to avoid cell loss that might occur during the freezing and thawing process. Allogeneic cord blood is stored frozen at a cord blood bank because it is only obtainable at the time of childbirth. To cryopreserve HSC a preservative, DMSO, must be added and the cells must be cooled very slowly in a control rate freezer to prevent osmotic cellular injury during ice crystal formation. HSC may be stored for years in a cryofreezer which typically utilizes liquid nitrogen because it is non-toxic and it is very cold (boiling point -196°C.)

The chemotherapy or irradiation given immediately prior to a transplant is called the conditioning or preparative regimen. The purpose is to help eradicate the patient's disease prior to the infusion of HSC and to suppress immune reactions. Chemotherapy drugs and radiation both damage DNA in the cell nucleus which kills rapidly dividing cells by triggering a self-destruct mechanism called apoptosis. Bone marrow cells divide frequently and are particularly sensitive to this treatment. The bone marrow can be ablated at doses that cause minimal injury to other tissues. In allogeneic transplants a combination of cyclophosphamide with busulfan or total body irradiation is commonly employed. This treatment also has an immunosuppressive effect which prevents rejection of the HSC by the recipient's immune system. Autologous transplants may also use these conditioning regimens but many other chemotherapy combinations can be used depending on the type of disease.

Non-myeloablative allogeneic HSCT is a newer treatment approach which uses lower doses of chemotherapy and radiation which are too low to eradicate all of the bone marrow cells of a recipient. Instead, non-myeloablative transplants exploit the graft versus tumor effect for their benefit. They do require high doses of immunosuppressive agents in the early stages of treatment. This leads to a state of mixed chimerism early after transplant where both recipient and donor HSC coexist in the bone marrow space. Decreasing doses of immunosuppressive therapy then allows donor T-cells to eradicate the remaining recipient HSC and to induce graft-versus-host disease and the graft versus tumor effect.

Non-myeloablative (or "mini") allogeneic transplants, because of their gentler conditioning regimens, are associated with a lower risk of transplant-related mortality and therefore allow patients who are considered too high-risk for conventional allogeneic HSCT (because of age or other comorbidities) to undergo potentially curative therapy for their disease. These new transplant strategies are experimental, for the most part, and available at academic research centers.

HSC are infused into the blood stream of the recipient through an intravenous (i.v.) catheter, like any other i.v. fluid. The HSC briefly circulate in the blood stream and then populate the recipient's bone marrow spaces where they grow and start to produce blood cells. After several weeks of growth in the bone marrow, expansion of HSC and their progeny is sufficient to normalize the blood cell counts and reinitiate the immune system. Donor-derived hematopoeitic stem cells have been documented to populate many different organs of the recipient, including the heart, liver, and muscle, a phenomenon known as stem cell plasticity.

Side effects and complications

HSCT is associated with a fairly high mortality (10% or higher), which limits its use to conditions that are themselves essentially life-threatening. Major causes of complications are sepsis, graft-versus-host disease and veno-occlusive disease.

Regimen-related toxicities are side-effects of the high dose chemotherapy or irradiation used in ablative HSCT.

Severe liver injury is termed hepatic veno-occlusive disease (VOD). Elevated levels of bilirubin, hepatomegaly and fluid retention are clinical hallmarks of this condition. Initially thought to be a specific form of Budd-Chiari syndrome (i.e. thrombosis of the liver veins). There is now a greater appreciation of the generalized cellular injury and obstruction in hepatic vein sinuses, and it has thus been referred to as sinusoidal obstruction syndrome (SOS). Severe case are associated with a high mortality. Anticoagulants or defibrotide may be effective in reducing the severity of VOD but may also increase bleeding complications. Ursodiol has been shown to help prevent VOD, presumably by helping the flow of bile.

Mucositis is the injury of the mucosal lining of the mouth and throat and is a common regimen-related toxicity following ablative HSCT regimens. It is usually not life-threatening but is very painful, and prevents eating and drinking. Mucositis is treated with pain medications plus intravenous infusions to prevent dehydration and malnutrition.

Bone marrow transplantation usually requires that the recipient's own bone marrow is destroyed ("myeloablation"). Prior to "engraftment" patients may go for several weeks without appreciable numbers of white blood cells to help fight infection. This puts a patient at risk of infections, sepsis and septic shock despite prophylactic antibiotics. The immunosuppressive agents employed in allogeneic transplants for the prevention or treatment of graft-versus-host disease further increase the risk of opportunistic infection. Immunosuppressive drugs are given for a minimum of 6-months after a transplantation, or much longer if required for the treatment of graft-versus-host disease. Transplant patients lose their acquired immunity, for example immunity to childhood diseases such as measles or polio. For this reason transplant patients must be re-vaccinated with childhood vaccines once they are off of immunosuppressive medications.

The beneficial aspect of the Graft-versus-Host phenomenon is known as the "graft versus tumor" or "graft versus leukemia" effect. For example, leukemia patients with chronic graft-versus-host disease after an allogeneic transplant have a lower risk of leukemia relapse. This is due to a therapeutic immune reaction of the grafted donor lymphocytes against the diseased bone marrow of the recipient. This lower rate of relapse accounts for the increased success rate of allogeneic transplants compared to transplants from identical twins, and indicates that allogeneic HSCT is a form of immunotherapy. Graft vs tumor is also the major mechanism of benefit of non-myeloablative transplants which do not employ high dose chemotherapy or radiation.