The characterizing feature of the one-dimensional harmonic oscillator is a parabolic potential field that has a single minimum usually referred to as the "bottom of the potential well". As stated above, the Schrödinger equation of the one-dimensional quantum harmonic oscillator can be solved exactly, yielding analytic forms of the wave functions (eigenfunctions of the energy operator). The corresponding energy eigenvalues are labeled by a single quantum number n,

where h is Planck's constant and ν depends on the the mass and the stiffness of the oscillator (see below). Note that for n = 0 the energy E0 is not equal to zero, but equal to the zero-point energy ½hν. This well-defined, non-vanishing, zero-point energy is due to the fact that the position x of the oscillating particle cannot be sharp (have a single value), since the operator x does not commute with the energy operator. Hence, by Heisenberg's uncertainty relation, energy and position cannot be sharp simultaneously. Classically, the oscillating particle can come to rest at the bottom of the potential well, where it has zero kinetic and potential energy and a well-defined—sharp—position. Quantum mechanically this is not possible, the position x of the particle of lowest possible energy is described by a wave function (a Gaussian function) of energy ½hν.

The four lowest energy harmonic oscillator eigenfunctions are shown in the figure. Note that the lowest function (blue) has indeed the form of a Gaussian function. The functions are shifted upward such that their energy eigenvalues coincide with the asymptotic levels, the zero levels of the wave functions at x = ±∞. As an example of a zero level, the zero (asymptotic) energy of the n = 2 function (black) is plotted as the black horizontal line of constant energy

According to quantum mechanics, the wave function squared of a point mass, |ψ(x)|², is the probability of finding the mass in the point x. In the figure we see that the probability of finding the oscillating mass at points to the left (for negative x) or to the right (for positive x) of V(x) is non-zero and we notice that for these points the potential energy V(x) is larger than the energy eigenvalue. As an example two small vertical lines are plotted: to the left of the small line that lies at negative x the potential energy is larger than E2, the energy of the n = 2 level. The same holds for the region to the right of the small black line at positive x. Note that the n = 2 wave function (black) is not zero in these regions. 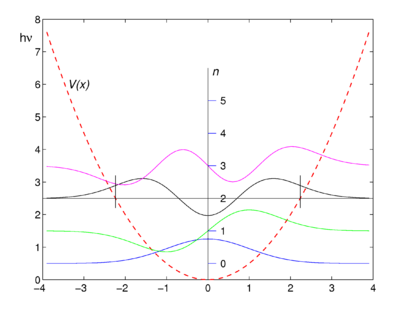 In classical mechanics the potential energy V can never surpass the total energy E, because V = E − T and the classical kinetic energy T is non-negative, so that V ≤ E. This is why the region, where the energy eigenvalue of an eigenfunction is smaller than the potential energy, is called a classically forbidden region. The fact that the probability of finding a mass in a classically forbidden is non-zero, is often expressed by stating that the point mass can tunnel into the potential wall. This tunnel effect is one of the more intriguing aspects of quantum mechanics.

The solutions of the Schrödinger equation are characterized by a vibration quantum number n = 0,1,2, … and are of the form

The functions Hn(x) are Hermite polynomials; the first few are:

The graphs of the first four eigenfunctions are shown in the figure. Note that the functions of even n are even, that is,

, while those of odd n are antisymmetric

Solution of the Schrödinger equation

We rewrite the Schrödinger equation in order to hide the physical constants m, k, and h. As a first step we define the angular frequency ω ≡ √k/m, the same formula as for the classical harmonic oscillator:

Secondly, we divide through by

, a factor that has dimension energy,

and the Schrödinger equation becomes

Note that all constants are hidden in the equation on the right.

A particular solution of this equation is

Use the Leibniz formula

The differential equation of Hermite with polynomial solutions Hn(y) is

Due to the appearance of the integer coefficient 2n in the last term the solutions are polynomials. We see that if we put

that we have solved the Schrödinger equation for the harmonic oscillator. The unnormalized solutions are