A hard disk or hard drive is one component of a modern computer. It is the physical device that holds data on a permanent basis, also known as "secondary storage."

A hard disk should not be confused with a 3.5" floppy disk - although "hard disk" sounds like a description of the plastic-covered disk, "floppy disk" is a more accurate description.

A hard disk is an example of non-volatile memory.

Description of the inner workings 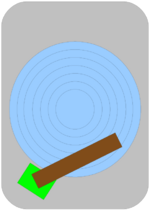 Data is written onto metal platters via an arm with a read/write head on the end of it. This arm is depicted in the image shown in this section as the brown line that is attached to the green box. The arm swings back and fourth, reading or writing data across the platters in a similar manner that a phonographic record is read, or a CD is read by a laser.

The magnetic field of the area where the read/write head happens to be determines whether the data that gets recorded is a 1 or a 0. These bits correspond to bytes, which make up the building blocks of the data saved to the drive.