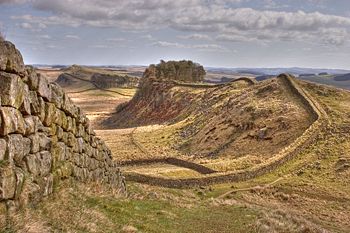 Hadrian's Wall is a UNESCO world heritage site that was built by the Romans, under direct orders from the Emperor Hadrian, between 122 and 130 AD. The wall marked the northern edge of Rome's Empire at that time. It runs across the isthmus in the middle of the Island of Great Britain from the Solway Firth in the west to Wallsend near Newcastle in the east: a distance of 73 miles. Just 8 years after the wall's completion, near the beginning of the reign of Emperor Antoninus, the wall was abandoned in favour of a new frontier about 100 miles north. Hadrian's wall was re-occupied in 164 AD and remained garrisoned until the Roman army left Britain around the end of the 4th century.

The Emperor Hadrian reigned from 117 to 138 A.D. He had inherited an empire that had been aggressively expansionist. However, by the second century, Rome's expansion had slowed and the Empire had reached its peak size. Hadrian sought to consolidate his empire rather than to expand it. In 122 A.D., he visited the Island of Britain. The majority of the island had long been under Roman rule. However, the north remained untamed. Hadrian wanted to fix the frontier and provide a permanent defence of Roman lands. To this end he ordered the construction of a wall across a narrow point of Britain, dividing Rome from the barbarian lands to the north.

The Tyne and South Tyne river valleys provided a communications route from east to west through the high hills and mountains that run up the centre of Britain. A line of forts already existed across the isthmus to protect this route. The wall was built just north of these forts, following the most advantageous terrain where possible. The route begins near Newcastle in the east. From there it runs along a ridge that forms the north of the Tyne valley for a distance of around 50 km (30 miles). It then makes use of a line of north facing crags. At the end of the crags it follows the ridge on the north side of the valley of the rivers Irthing and Eden until it nears Carlisle. For the last 56km (34 miles), the wall runs along the southern edge of the Solway Firth as far as Bowness.

The initial construction of the wall was stone for the eastern section of 80 km (50 miles) and a turf and timber wall for the remaining western 50 km (30 miles). The western section would later be upgraded to stone. The wall was to be 2.92 metres wide (10 Roman feet) and estimated to have a design height of 4.3 metres (15 Roman feet). The turf wall section was 5.84 metres (20 Roman feet) wide and of similar height to the stone section. A ditch was dug beyond the wall except where the line of crags made such a ditch unnecessary. There was a gate every mile along the length, set within a tower. A small enclosure containing a barrack building was set behind each gate. These are known as milecastles. Two turrets lay equidistant between each milecastle. Artists' reconstructions typically depict the wall with a walkway along the top, akin to the Great Wall of China. However, there is no evidence pointing to the existence of such a walkway, the top of the wall having long since been lost. Some experts assert that the frequency of turrets and milecastles made such a walkway superfluous.

The wall's design was significantly altered while still under construction. New forts were constructed abutting the wall or even straddling it. Another addition was a trench dug slightly to the south of the wall. This was known as the Vallum. It is such a large earth work that even 800 years later, the Venerable Bede mentions it in his descriptions. The Vallum restricted the number of crossing points on the wall. Rather than a gate at every milecastle, people could now only cross at the forts. The purpose of this second, southern defence remain unclear. It greatly restricts travel across the frontier. It is speculated that the Vallum served to defend against potential trouble south of the wall. A war within Roman Britain can be dated to this time.

The size of the wall was also altered. The width narrowed to just 2.34 metres (8 Roman feet). There is also a marked decrease in the quality of workmanship. The point in construction where these changes were made can still be seen in one section of the wall. The foundation of this section had been constructed to the 10 feet width but the main height is 8 feet wide. This results in a step part the way up this section of the wall.

Between the Wall and the Vallum, a roadway was constructed. This would have allowed troops to travel quickly along the length of the wall as required. Large sections of this route are still used today. Another the roadway was built some distance south of the Vallum. This provided a second line of defence. The road itself would have been a strong defensive line. Following normal Roman road building techniques, it would have been raised above the surrounding landscape with a ditch on either side. The route of the roads also make full use of the topography to assist defence, following high ground and ridge lines wherever practical.

A large proportion of the stones making up the Wall were removed for other building projects, leaving only a fragmentary "wall" at the present day.