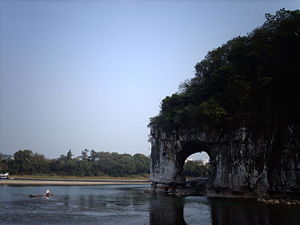 (CC) Photo: Derek Harkness
Elephant Trunk Hill in Guilin is a famous tourist site in China.
Guilin is a city in the Guangxi Autonomous Region in the South of the People's Republic of China. Situated on the banks of the Kuei and Li Rivers, encircled by four lakes, and set amid spectacular limestone karst mountains, Guilin is a major tourist destination and famed beauty spot. A scene from the Li river, near Guilin, appears on the reverse side of the Chinese 20-yuan notes.

Separated from the center of China and the Yangtze river basin by the Nan mountains, Guangxi has always been distinct form the rest of China. In early times, it was considered to be inhabited by unruly barbarians. The Han Chinese empire first expanded into Guangxi in the 3rd century BC. The Ling Canal was cut around this time, allowing small boats to transit form the Yangtze to the south-flowing Xi River via the Kuei River.

Trade grew along the canal and river routes. Guilin was founded as a trading post in the 1st century BC on the west bank of the Kuei River. During the Ming dynasty, a garrison was set up in Guilin and the surrounding area gradually civilised with the development of farmland. The city had a population of over two million at the beginning of the Second World War, but was utterly destroyed during it. The population recovered slowly with the post-war construction of several factories for the production of paper, chemicals and agricultural equipment. However, market forces have caused several of these industries to relocate out of Guilin.

Guangxi and Guilin are home to twelve different ethnic minorities besides the Han Chinese. Guangxi is an autonomous region for the Zhuang ethnic group, rather than a province (see List of Chinese provinces and regions). Various other minorities, such as the Dong, are also found in the area.