In physics and mathematics, Green's functions are auxiliary functions in the solution of linear partial differential equations. Green's function is named for the self-taught English mathematician George Green (1793 – 1841), who investigated electricity and magnetism in a thoroughly mathematical fashion. In 1828 Green published a privately printed booklet, introducing what is now called the Green function. This was ignored until William Thomson (Lord Kelvin) discovered it, recognized its great value and had it published nine years after Green's death. Bernhard Riemann gave it the name "Green function".[1]

Let Lx be a given linear differential operator in n variables x = (x1, x2, ..., xn), then the Green function of Lx is the function G(x,y) defined by

where δ(x-y) is the Dirac delta function. Once G(x,y) is known, any differential equation involving Lx is formally solved. Suppose we want to solve,

for a known right hand side ρ(x). The formal solution is

The proof is by verification,

where in the last step the defining property of the Dirac delta function is used.

The integral operator that has the Green function as kernel may be seen as the inverse of a linear operator,

It is illuminating to make the analogy with matrix equations. Let

be n×n matrices connected by

then the solution of a matrix-vector equation is

The Green function of

As an important example of this Green function we mention that the formal solution of the Poisson equation of electrostatics, reading

where ε0 is the electric constant and ρ is a charge distribution, is given by

The integral form of the electrostatic field may be seen as a consequence of Coulomb's law. The field at the point x due to the charge dQ = ρ(y)dy is equal to

The field is additive in the charges, so integration gives the total field at x. 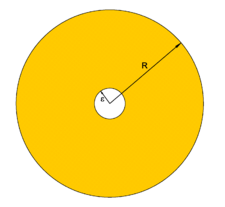 Proof of Green function of ∇2

where Va is a sphere with radius a and Sa is the surface of this sphere. The smooth test function φ and its gradient vanish for large r,

Further we notice that

because r ≠ 0 in that region (see the figure, where the region is indicated in yellow). This result is most easily proved if we recall that in spherical polar coordinates

because by assumption φ and its gradient vanish on SR.

from which the result to be proved follows directly. The main trick is to write

and to consider first the integral over Uε (the yellow domain in the figure) for non-zero, but small, ε. After the integral has been evaluated, the limit for zero ε is taken.

Since Uε has two surfaces, Green's theorem cannot be applied directly, and therefore we write (see the figure),

and apply Green's theorem to the two terms. Recalling that we saw already the first term, we get

The integral between square brackets is zero because ∇2(1/r) is zero on Uε. The last integral can be shown to vanish for small ε. Because φ and its gradient are smooth and finite, and r is constant (equal to ε) on the surface, we may write for small ε

where we assumed that

and that the value of the gradient averaged over the surface may be taken out of the integral. The remaining surface integral is equal to 4πε2.

In order to evaluate the final integral we use

Here we assumed that the test function φ(r) is constant over the surface (isotropic) for small ε. The limit ε → 0 gives the desired result.