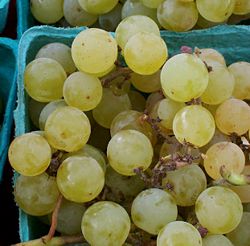 Grapes are berries of the genus Vitis. These vine-grown berries are cultivated all around the world for a wide variety of food uses. In addition to the familiar green and red table varieties, some grape species are amber, purple, or nearly black.

The earliest recorded reference of grape cultivation is in Egyptian records of the 4th Dynasty, c. 2400 BC. At that time, winemaking was already a major use for grapes. Cultivation spread to Europe via the Phoenicians c. 600 BC.

Many of the major varieties of grape grown today are of Mediterranean origin. Notable exceptions are the Concord grape, developed in 1849 near Concord, Massachusetts from American fox grapes (V. labrusca), and the muscadine (V. rotundifolia) which is native the the southeastern United States.

Many European varieties are grown on American rootstock to provide resistance to grape phylloxera, a parasitic insect which nearly destroyed European viticulture in the late 1800s.

Grapevines are propagated through cuttings of canes (stems) or through grafts. Cuttings are usually taken in winter and grown in a nursery for a year before final planting the next spring. Grafts are usually done in the late summer.

Grapes grow best in climates with long, dry summers and cool, but not very cold, winters. Vines begin to produce grapes at 3 years after planting, and reach full production at 5 or 6 years. The grapes may ripen from summer to early fall, depending on the variety.

Vines are grown on trellises for support, and pruned to "train" them to the desired shape. Further pruning occurs after every harvest. 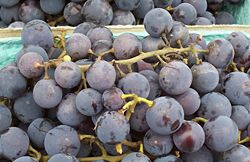 Grapes provide many different foods. Table grapes are those grown for eating directly. Grapes with a high sugar content are best for winemaking. Several seedless varieties are dried to make raisins. Grape juice and grape jelly are primarily produced from the Concord grape.