Government of the United States of America 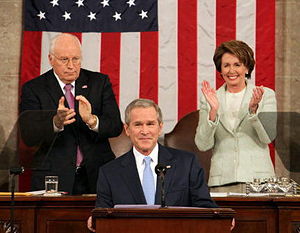 The Government of the United States of America is separated by the Constitution into legislative, executive and judicial branches: Congress, the office of President and subordinates, and the federal courts, the highest of which is the Supreme Court. The two chambers of Congress, the House of Representatives and the Senate, are directly elected by U.S. citizens, who also vote for electors who in turn choose the President and Vice-President. The House and Senate respectively choose the President and Vice-President if this Electoral College does not produce nominees.

There are three main levels of government in the United States, and they are not strictly hierarchical, i.e. local governments are subordinate to state governments, but the states are subordinate to the Federal government only in some matters but not in others. The question of the exact relationship is the issue of "federalism"; the main points were settled by the American Civil War and Reconstruction, but small points remain a matter of political and constitutional debate.

For more information, see: House of Representatives and U.S. Senate.

The legislative branch of the federal government is composed of the Congress. The Congress is bicameral (two houses), and consists of the House of Representatives and Senate. All states have two senators, and each state's number of representatives is decided by the state's population. 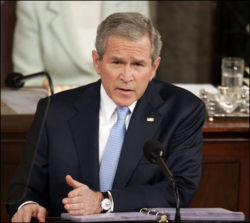 For more information, see: President of the United States of America.

As head of state, the President appoints members of the executive, subject to Senate scrutiny, and judges to the Supreme Court. The current head of state and head of government is Joe Bidene, serving a four-year term.

The judicial branch consists of a system of federal courts, with the Supreme Court at the top. The Supreme Court has jurisdiction to interpret federal law, determine if laws are incompatible with the U.S. Constitution, determine the legality of decisions made by the Court of Appeals and make determinations of due process, but does not normally make factual determinations or findings of fact (except in certain narrow categories of cases such as lawsuits between States).

It is headed by the "Highest Court in the Land," the Supreme Court of the United States (nicknamed "SCOTUS"). This court is composed of 9 justices (judges) who are appointed for life by the president. The Supreme Court serves as the last resort for appeals the court itself chooses to hear.