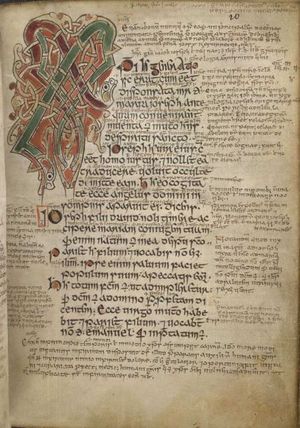 The illuminated Chi Rho monogram for Matthew 1:18 on folio 10 recto of the Gospels of Mael Brigte

The Gospels of Mael Brigte (British Library, Harley MS 1802, also known as the Armagh Gospels and the Marelbrid Gospels) is an illuminated Gospel Book, with glosses. It was created in 1138 in Armagh by scribe named Mael Brigte Ua Mael Uanaig. The codex includes the Latin text of the Gospels, along with glosses and prefatory material. There are also several inscriptions in Irish.

There are 156 vellum folios along with 2 parchment and 2 paper flyleaves which are not counted in the official foliation. The leaves are 165 mm by 120 mm. The text is contained in area of 120 mm by 70 mm. The binding is of red leather with gilt tooling and dates from after 1600. The text is written in an Irish minuscule hand.

In addition to the text of the Gospels, the manuscript includes several pieces of prefatory material. The prefatory material is grouped together at the beginning of the manuscript. Interestingly, the Genealogy of Jesus found at the beginning of the Gospel of Matthew (Matthew 1:1-17) is treated as a separate work than the rest of Matthew and is separated from the main text of Matthew. The prefatory material includes: Jerome's prologue to the Vulgate translation of the Bible (folio 1r), the prologue to the Gospel of Matthew (folio 3r), the Genealogy of Jesus from Matthew (folio 4v), a list of interpretations of the Syriac and Hebrew names found in the Gospels (folio 4v), a poem in Irish on the Three Magi (folio 5v), the prologues to the Gospels of Mark (folio 6r), Luke (folio 6v) and John (folio 7v), a prologue to the four Gospels in which the evangelist are compared to other groupings of four such as the four seasons and the four elements, and a poem in Irish on the appearance and manner of death of Christ and the Twelve Apostles (folio 9v). Following the prefatory material, the Gospel of Matthew starts at the beginning of the Nativity narrative at Matthew 1:18 (folio 10r), and is followed by the complete texts of the Gospels of Mark (folio 61r), Luke (folio 87r) and John (folio 128r).

At the end of each Gospel there are colophons which identify the scribe and give some information about him. He is identified as Mael Brigte Ua Mael Uanaig and he was writing in Armagh in his twenty-eight year. Mael Brigte alludes to various contemporary events, such as the killing of Cormac mac Carthaig by Tairdelbah O Briain which allow the writing of the manuscript to be dated to 1138. Marginal and interlinear glosses and notes were added in the 13th century.

The manuscript is decorated in Insular style. Although the high point of Insular style was centuries before the production of this manuscript, this manuscript is an example of the enduring appeal of the Insular style in Ireland. The decoration in the manuscript includes two full page miniatures of Evangelist symbols, the lion of Mark (folio 60) and the ox of Luke (folio 86). In both of the miniatures, the artist has solved the problem presented by placing horizontally oriented animals in the space of the vertically oriented page by turning the animals ninety degrees so that they seem to walk up the page. Both symbols are abstracted, placed against an abstract multi-colored background, and contained within a thick border made of decorated panels. There are also four large zoomorphic initials in the manuscript; at the beginning of the Nativity of Christ in the Gospel of Matthew (Matthew 1:18, folio 10r), and the beginning of the each of the other Gospels (folios 61r, 87r, and 128r). There are smaller initials at beginning of each section of the prefatory material, and at important texts within the Gospel, including the Pater Noster in Matthew (folio 19r), the Magnificat in the Luke (folio 88r), and the beginning of the Resurrection sequence in Luke. Other initials in the manuscript are highlighted in color. All of the decoration in the manuscript is done in green, red, brown, and yellow washes.

The manuscript was in the Bibliotheque du Roi in Paris by the early 18th century, when it was described as being part of library by Pere Richard Simon in his Bibliotheque critique in 1708. It was stolen from the Bibliotheque du Roi in 1707, along with other manuscripts by Jean Aymon. Aymon took to Holland where it was purchased by Robert Harley. It remained part of the Harley Collection, which was purchased in 1753 by Act of Parliament and became one of the foundational collections for the British Library.