Google Docs, an abbreviation for Google Documents, is an online document service by Google. Google Docs has a word processing tool, a presentation tool, a spreadsheet tool and a form developer. Google Docs is giving competition to Microsoft Office, which is one of the biggest products of Microsoft. The free availability of Google Docs has made it an alternative for Microsoft Word. The debate of which one is more powerful started since the time Google Docs was introduced ans has been lasting since then. However, as far as cost, functionality, collaboration, convenience and security are concerned, each of them has advantages and disadvantages. 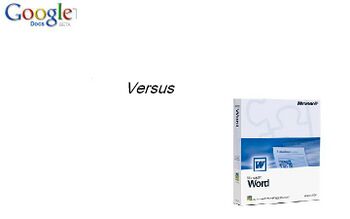 The reason that Google Docs can beat Microsoft Word is mostly because it is free. Although Google charges up to 50 dollars service fee to its premium customers, it is still little money compared to 500 dollars MS office charge.

Although Google supports Doc, Spreadsheet and Slides, the functionality of the last two are not that powerful. When importing a MS PowerPoint, the format of that file will be lost. Furthermore, if there's a video in the slides, it can not be shown in Google. Most of MS Excel users will not turn to Google Spreadsheet not only because Spreadsheet is a pain to learn but also because they rely on Excel's mathematical and statistical functions. Last but not least, the one big missing piece of Google Docs is offline access. If network is not connected, then there's no functionality that Google can provide.

The significant feature of Google Docs is collaboration. Users can invite any one who also has a Google account to view and edit the file on line together. With simply clicking on the "Share" button, the file will be available to those invited users. All the changes will be made as soon as the editor click the "Save" button. In MS word, user must either email the file as an attachment or use a thumb drive to deliver his file and wait other users apply back using the same painful way.

Since Google Docs require no software download or install in the local computer, user can access it on any computer anywhere. While users want to collaborate editing, they don’t have to be in the same place or even working. What's more? Google Docs has moved ahead on mobile access, which means user can use a Blackberry or iPhone to edit a file while sitting on a bus or waiting for McDonald's.

Google's web-based versions are not as feature-rich as Microsoft Office, but they are simple, cheap, and, for many users, convenient. Most mainstream Microsoft customers still prefer to remain with Microsoft. But some former Microsoft customers have made the switch and others are now considering using Google Docs. For now, Google can meet the need for casual office application users. And its products are being constantly upgraded.