Gladysvale Cave (25 54'S, 27 45'E) is a fossil-bearing breccia-filled cave located about 13km Northeast of the well known South African hominid-bearing sites of Sterkfontein and Swartkrans and about 45km North-Northwest of the City of Johannesburg, South Africa. It is situated within the Cradle of Humankind World Heritage Site. 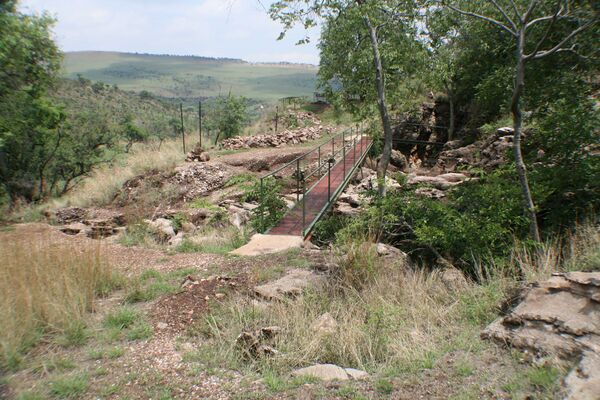 A view of the external deposits at Gladysvale Cave, South Africa.

Gladysvale is the first cave that Robert Broom visited in the Transvaal in his mid-1930's search for a hominid-bearing cave nearer to Johannesburg than Taung[1]. He visited Gladysvale after a butterfly collector from the Transvaal Museum reported a "human mandible" in the wall of the cave. When Broom arrived at the cave the mandible was gone. Sterkfontein soon lured Broom away from the site. In 1946 Phillip Tobias led a student expedition to the site where a fine baboon fossil was recovered[2]. In 1948 Frank Peabody of the Camp-Peabody expedition from the United States spent several weeks at Gladysvale but failed ot find any hominid remains. The site was lost from scientific memory until it was re-opened by Lee Berger and Andre Keyser in 1991. Within a few week of excavation the first hominid remains were discovered - two teeth of Australopithecus africanus. This discovery made Gladysvale the first new early hominid site to be discovered in South Africa since 1948 (when the last site - Swartkrans - was discovered by Robert Broom)[1].

Since the discovery of these teeth more than a quarter of a million fossils have been recovered from Gladysvale during excavations conducted by joint teams from the University of the Witwatersrand, the University of Zurich and Duke University[3]. 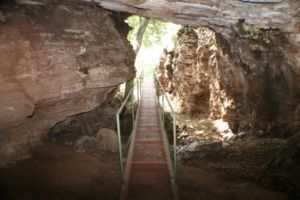 A view of the entrance into Upper Cave 1 at Gladysvale Cave, South Africa.

Gladysvale is a large system of caves consisting of several underground chambers reaching to a depth of 65 m below the surface.The presently roofed section consists of an upper chamber and at least two lower depositories, in which a number of different aged fills are preserved. These are collectively known as the Gladysvale Internal Deposits (GVID). The outer de-roofed section is known as the Gladysvale External Deposit (GVED)[4].

The Gladysvale sequence has been dated using faunal methods and absolute methods. At present, the youngest deposits are thought to be around 54,000 years old while the oldest are around 2 million years old. To date at least five episodes of cave fill have been documented, which, based on the fauna and provisional ESR dates seem to have occurred from around 2 Mya, with clusters of dates at 1.4-1.2 Mya, 800-600 kyr, and 250-200 kyr[4]. 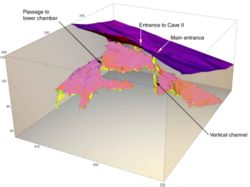 A 3D wireframe model of the gladysvale internal chambers. Gladysvale was one of the first cave sites in Africa to be mapped using laser theodolites and 3D software.

Gladysvale has become well known for its exceptional horizontally-bedded stratigraphy and has been the site of the testing of many of the absolute dating techniques which have proved successful on the hard to date breccias of the South African fossil-bearing caves. The site is presently divided into three underground cave systems with the upper cave holding the Gladysvale Internal Deposits and an External Deposit. Gladysvale was one of the first sites in Africa to be 3-D digitally mapped by Peter Schmid and students from the University of Zurich [3].

Many thousands of fossils have been recovered from the Gladysvale deposits including rare remains of hominids. From the Gladysvale external deposits (also called the GVED), almost a quarter of a million bones have been recovered since excavations began in 1992. There are many hundreds of bones still in place in the cave. Fossils recovered include antelope, giant zebra, carnivores including extinct wolves, monkeys and hominids attributed to Australopithecus africanus and early Homo[3]. 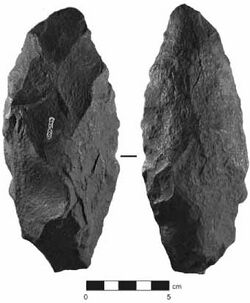 A handaxe from the Gladysvale cave, South Africa. The tool is dated to approximately 800,000 years.

Tools have also been found with the most spectacular being an Acheulean handaxe, recovered from 1 million year old sediments[4]. Iron Age artefacts and remains are found in overlying sediments of the internal deposits.