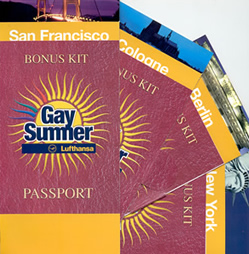 Gay marketing refers to marketing activities which are primarily designed to understand and fulfill the consumer needs of lesbians and gay men.

It is also sometimes referred to as GLBT (or LGBT) marketing, referring to the potential target marketing groups of gay, lesbian, bisexual or transgender people. In this article we use the term “gay marketing” to refer to niche marketing strategies targeting any of the members of the GLBT market segment.

The process of creating marketing strategies specifically to target lesbians and gay men has evolved considerably over several decades. Yet gay marketing is still considered, in marketing terms, to be a recently new consumer development, which is strictly true only in relation to the most prominent examples of gay marketing – the advent of mainstream consumer brands engaging in activity intended to constitute targeted gay marketing activities.

The concept of a ‘gay market’ has no definitive starting point and has evolved in different ways in different regions of the world, however its earliest origins can be traced to the decades of the 20th century when gay men and lesbians first started meeting at social gatherings, often in secret, sometimes in non-licensed venues. This was also in most countries the beginnings of what came to be known as the gay community. In pre-World War 2 Germany for example, there was a well developed gay and lesbian scene in larger cities such as Berlin. There are descriptions of a so-called ‘gay underground’ developing in various decades in countries including the US, Australia, UK and across much of continental Europe.

Following the Stonewall riots in New York in 1969, gay and lesbian movements evolved in various countries. Increasingly visible social activities resulted in an increasingly identifiable gay market. Gay marketing at this time primarily consisted of venue owners seeking to attract gay customers, usually males, to choose to visit their venues to spend money on admission charges, food and drinks. A new visibility of the gay 'scene' at this time began to attract the interest of alcohol brands such as Jim Beam bourbon whisky, Smirnoff and Absolut vodka which were amongst the earliest mainstream brands to target advertising directly at gay consumers in gay media.

Apple Computer was one of the first mainstream, non-alcohol brands to develop a marketing interest in lesbian and gay consumers. Its brand began appearing in gay media in the US in the early 1990s. Apple also was effective at generating significant gay market goodwill and effective PR when it made public its decision to move the location of an office from one US state to another, due to the original state lacking adequate gay equality and diversity policies. Such public relations decisions, where they have a positive impact on consumer perceptions of the brand, may be considered to have a gay marketing impact as a result, especially when they affect gay consumer brand selection.

In the US, Ikea created a mainstream TV advertisement in 1994 which, although broadcast only once as an advertisement, was featured in news coverage in many markets across the world, as it profiled a clearly gay male couple shopping for furniture in one of their stores.

In Australia in the same year, Toyota created two advertisements featuring gay males that had a similar market impact.

In 2009, in many countries around the world there is now clearly discernible gay marketing activity occurring.[1] Mainstream brands marketing to gay consumers is more commonplace than any previous time in the past, and includes many of the largest brand names such as IBM and Ford in the US, Barclays and BT in the UK, Virgin Blue in Australia and Lufthansa in Europe.[2] There is now no single gay market but rather many gay marketing sub-segments, sometimes that can require unique gay marketing initiatives.

Some industry segments such as gay tourism, banking and financial services, automotive, cosmetics, fashion and pharmaceuticals all have major brands competing against each other increase their share of the gay market by way of dedicated gay marketing efforts. The gay market has evolved in differing ways in different parts of the world. In the US for example, a larger number of mainstream brands now tend to target gay consumers with advertising in gay media, but the advertising utilized remains somewhat less targeted than is the case in some other regions, such as Australia and Europe.[3]

In some regions today - including parts of Asia, Eastern Europe, the Middle East and Russia - gay and lesbian culture, and the resulting gay market, remains ‘underground’ or less visible to the mainstream than is the case in other countries where a gay market has evolved more fully.

The role of gay market research

In the early 1990s, particularly in Australia and the US, there was increasing research interest in the gay market and its demographics. This led to market research that specifically attempted to analyze gay consumer habits and measure how their consumer characteristics were the same as, and different from, prevailing market averages.

Increased research knowledge generated increased awareness amongst many mainstream consumer brands of the relevant characteristics of the gay market. This resulted in a concomitant increase in interest at many consumer brand companies in developing gay marketing strategies.

In various countries specialist agencies, where gay marketing is the sole or primary business focus, have been established to work for client brands that wish to understand and meet the consumer needs of the GLBT market through gay marketing activity.[4] Prominent examples of specialized gay marketing agencies include Witeck-Combs Inc., Prime Access (in the US), Out Now Consulting (in Europe) and Significant Others Consulting (in Australia).

The evolution of a visible gay community in the 1960s and 1970s saw the parallel development of a nascent gay media, focused exclusively on publishing magazines and newspapers with a gay community information focus. Gay marketing utilized such specialized media to reach the gay market niche audience.[5]

In 2004, a gay TV channel, Pink, including capital investment funding from mainstream French media brands, launched with lifestyle programming targeting gay consumers. In 2005, Viacom’s MTV Networks launched a dedicated cable channel, Logo, to target the gay market.[6] Brands to advertise on the channel include Macy's and Subaru. A competing US gay network is here! TV.

Other examples of gay marketing

As with the Apple decision to move office locations in the US, large companies can achieve gay marketing through considering how corporate activities can form the basis of favorable public relations in the gay market. Some companies have in-house social and support groups for their GLBT staff and the existence of a gay staff association is sometimes used as part of an overall corporate gay marketing strategy.[7] Other public relations considerations include the presence of effective equality and diversity policies - applicable to customers and staff alike.

The 2007 decision by Whole Foods Market to site a new store in a Chicago gay and lesbian community center is an example of corporate decisions beyond mere advertising forming part of overall gay marketing activities.[8]

Sponsorship of gay and lesbian community events and organizations is another example of gay marketing activity designed to raise the profile of, and goodwill towards, sponsoring brands.

Despite some groups' concerns over business advertising to homosexual people, the value of the gay market has continued to attract the marketing attention of some of the world's largest brands.[11]