This article is about the Irish ball game. For other uses of the term Football, please see Football (disambiguation). 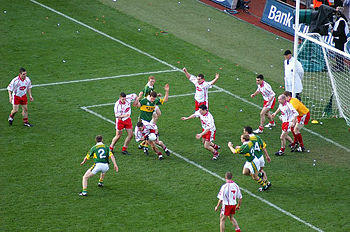 (CC) Photo: Michael McGonagle
Kerry vs Tyrone play in the 2005 Senior All-Ireland Football Final. Tyrone won with a score of 1-16 to Kerry's 2-10.
Gaelic football is an Irish sport that is predominantly played in Ireland or by emigrant Irish. Its administrative body is the Gaelic Athletic Association (GAA) or the Cumann Lúthchleas Gael (CLG) in Irish. It is an amateur sport, though there is simmering support for turning the game at least semi-professional.

It is played on a rectangular pitch approximately 137m long by 82m wide. At either end are goalposts that are the same shape as rugby goalposts (H-shaped). The ball is the same shape as a soccer ball but slightly smaller and heavier. Matches are 30 minutes a half (except at inter-county level where each half is 35 minutes). They are played by two teams of fifteen players with five substitutions allowed per side per game. Each team wears a different coloured jersey.

Players are allowed to use both their hands and their feet during the game (unlike soccer) and can pass forwards (unlike rugby). The ball can be either kicked or can be passed using the hand (a hand-pass). A hand-pass is a striking motion using either the palm of the hand or a fist. The ball can be carried in the hand for four steps and must then be bounced off the ground or solo-ed, which involves the player kicking the ball back into his/her hands. The ball may not be bounced off the ground twice in a row.

The premier competition in Gaelic football is the Football Championship. It starts in May and culminates in The All-Ireland Final in Croke Park on the third Sunday of September. 31 of the 32 Counties of Ireland (all except Kilkenny) plus teams from London and New York compete for the Sam Maguire. Prior to the Championship there is a League competition, the NFL. This is held between February and May. Every County also has its own Club Championships and clubs in the county compete in different grades of competitions. The winners of each County Championship then represents their county in an All-Ireland Club Competition that reaches its finale on St. Patrick's Day (March 17th) in Croke Park.