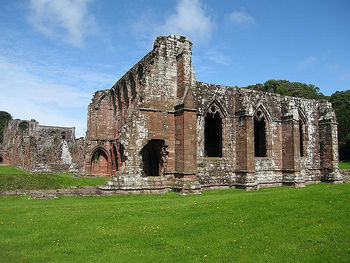 Furness Abbey was established in the early 12th century as a community of Savigniac monks. In 1147 the abbey come into the possession of the Cistercian order of monks when they absorbed the Savigniacs. By the 13th century Furness Abbey controlled estates which made its Abbot one of the most important land owners in the Furness area.

Furness was originally home to a community of Savigniac monks. Count Stephen of Boulogne (later King of England) invited them in 1124 to create a monastery in Lancashire. They first established themselves at Tulketh, but this was short lived and in 1127 they abandoned the site and moved to establish Furness Abbey. In 1147 the Savigniac order of monks was subsumed by the Cistercians. The abbot of Furness initially opposed the merger but eventually accepted it.[1] The community at Furness Abbey spawned several daughter monasteries. In 1134 the abbeys of Calder and Rushen were both founded by monks from Furness. More abbeys subservient to Furness were founded in 1180 (Inch in Ireland) and in 1205 (Abington).[2]

In the early 14th century war broke out between Scotland and England. The abbey’s location in northern England made it a target for Scottish raids, and in 1316 the Furness peninsula was sacked by the Scots. They ventured this far south in 1322, but this time the area was spared as the Abbott paid Robert the Bruce to leave Furness unharmed.[3]

Amongst the properties held were the abbey were several castles including one which was actually built by the abbey on Piel Island.[3] The castle was first mentioned in 1327 when the abbey was granted a licence to crenellate a building they owned on Piel Island. It is uncertain why the castle was built, though in the early 14th century northern England was subjected to Scottish raids and the fortification may have offered a degree of protection to the monastic community.[4] The abbot petitioned King Edward III for the licence, writing "The Abbot of Furness asks that, for his salvation and that of his monks and the country against the Scots, that he might have permission to enclose a messuage called Fowdray in Furness, and to fortify and crenellate it".[5][6]

The Dissolution of the Monasteries was conducted in the 1530s during the reign of King Henry VIII. The Pilgrimage of Grace was held in protest in northern England. The monastic community at Furness Abbey was accused of being involved in the protest and in April 1537 the Abbot surrendered the Abbey to royal control as otherwise he faced being tried for treason. A letter written three months later demonstrates that monks still resided in the abbey, but the buildings were in the process of being dismantled and valuables stripped. In 1538, the High Sheriff of Cumberland took over Furness Abbey and lived there, marking the end of the monastic community. From 1546 the buildings came under the care of the Preston family.[7] Meanwhile Piel Castle was recorded as being in a poor state of repair and its condition gradually decayed over the following centuries.[8] Furness Abbey is both a Grade I listed building and a scheduled monument. The ruins are now under the care of English Heritage and are open to the public.[9]

Furness Abbey is laid out around a central cloister, with a church on the north side, a range of domestic building on the west (including a dining hall), living quarters along the east side, and to the south was an additional dining hall. The earliest parts of this core of the complex date from the early 12th century when the abbey was still part of the Savigniac order, while the most recent parts – such as the great dining hall on the south side of the cloister – were built as late as the mid 13th century. In the 13th century a separate house for the abbot was built to the south east of the abbey, where he could entertain guests in private. An infirmary with its own chapel and kitchen was added in the late 13th century, situated south of the abbey, and in the 14th century great house was built to the north east of the church.[10]